SPAMALOT Looks on the Bright Side at Community Players 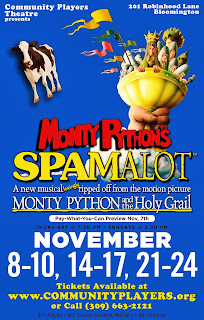 When the Monty Python musical Spamalot began its pre-Broadway tryout in Chicago back in late 2004, everyone was curious whether it would look more like Monty Python and the Holy Grail, the irreverent movie it was "lovingly ripped off from," or whether it would be more like a Broadway musical. Would it have the surreal insouciance of the former or the mainstream appeal of the latter? Would it be geared to the absurdist, snarky, anti-establishment Monty Python fans or the more traditional Broadway musical types who would plunk down $100 for Phantom or Les Miz?

Eric Idle, the part of Monty Python who created Spamalot, went for both at the same time. Idle attempted to bridge the gap between the two groups, pulling out some of the best bits of Holy Grail, like substituting coconut shells for horses, the Black Knight who fights on as he loses limbs, Brave Sir Robin who isn't brave at all, the French Taunter whose insults include "Your mother was a hamster and your father smelt of elderberries!" and even Dennis, the anarcho-syndicalist ditch-digger, and setting them right next to pieces of Broadway parody that wouldn't have been out of place in The Producers. In fact, I think a similar Fiddler on the Roof send-up appears in The Producers. There's also a big inspirational number called "Find Your Grail" reminiscent of "Climb Ev'ry Mountain," and a meta-piece in 'The Diva's Lament," wherein the leading lady wonders why she isn't getting more to do. Just for an added portion of Python, we get "Always Look on the Bright Side of Life," a song from the Life of Brian movie.

For me, the Python material beats the Broadway parody with one giant foot tied behind its back. Still, it's nice for everybody to get something to laugh at, even if "nice" isn't something I generally associate with Monty Python.

For Community Players, Spamalot gets plenty of laughs. Director Marcia Weiss has a game cast, full of actors and singers who are clearly enjoying the heck out of themselves, with John Bowen (Sir Lancelot), Joe Culpepper (Not Dead Fred), Aimee Kerber (Patsy), Dave Krostal (The French Taunter and several other roles), Austin Travis (Sir Robin), Alan Wilson (Galahad's mother) and especially Sharon Russell, who sparkles all over the place as the Lady of the Lake, as standouts. Russell is sensational on "The Song That Goes Like This" and "The Diva's Lament," and she raises the level of every scene she's in. If you know any of those people, you are likely to be rolling in the aisles when you see what they're getting up to in Spamalot.

Costume designers Opal Virtue and Sherry Bradshaw make the various knights and nuts look nifty, while Carol Plotkin and Dorothy Gordish add a whole range of cool props. Whether they borrowed, bought or built the costumes, the killer rabbit and the Grail, it all looks great on stage.