ISU Brings Out the Pretty Side of DANCING AT LUGHNASA 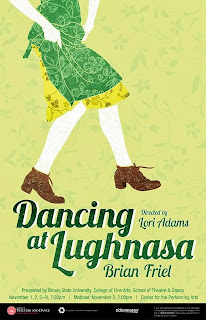 I've been reviewing theater for a very long time. I started writing for the Champaign News-Gazette in 1989, and at the beginning, my process was a bit like Jed Leland's in Citizen Kane, returning to the newsroom immediately after the performance to type up my thoughts. Without the manual typerwiter or the bottle of Scotch, of course.

I quickly discovered that my opinions were more fully formed if I let the performance sit overnight, just resting there till morning. I would wake up clearer and more focused on what I thought. And that's mostly been the way I've operated ever since. I let it sit. And then I can set out my opinion in a more reasoned, reflective manner.

I saw Brian Friel's Dancing at Lughnasa at Illinois State University's Center for the Performing Arts on Friday, November 1. That's more than a week that I've let this one sit, and I have to admit, I'm still not exactly sure how to approach this production. Hmmm...

First, let's be clear that this was not your standard proscenium staging in the Center for the Performing Arts. Director Lori Adams chose to set the action of the play on a side portion of the CPA stage, bringing the audience onto the stage with the actors, seated on folding chairs arranged on risers, with some of the "grass" from the set extending into corners and pathways through the seating area. We entered from the side hallway and never went near the actual seats in the auditorium. I am generally all for environmental staging, bringing us closer to the drama, and Jen Kazmierczak's scenic design is certainly pretty and charming, carving out a niche within the larger space of the Center for the Performing Arts with a warm little cottage that represents the home of the Mundy sisters and an overreaching tree with a beautiful blue sky in the background.

Likewise, Lauren Lowell's costume design is pretty, with a flouncy embroidered skirt here, an exquisite lace apron there, and an adorable pair of Mary Janes with red, gathered straps that my mother would've killed for when she was a teen in the late 30s.

The set and the costumes make for a lovely, idyllic tableau. It might also be an appropriate tableau for a memory play, one in which our adult narrator, Michael, steps back in time to conjure up the world of his mother and her sisters as he remembers them in 1936. But Michael is not a sentimental narrator. He knows full well -- and he tells us -- that the Mundy household was teetering on the edge of poverty at this precise moment. His memories include shoes with thin, much-mended soles and missing laces, and a dinner with three eggs stretched to make a meal for eight people.

In performance, this Dancing at Lughnasa is sweet and languid and almost like a fairytale. That makes for an interesting choice, if not necessarily the most dramatic choice, or the one most connected to the stark financial reality the sisters face. Yes, Dancing at Lughnasa is a play about family. But it's also about poverty, about the lack of options for women in Depression-era Ireland, about the difficulty of finding a way to keep a family together in a place where customs, rules and a hugely repressive church conspire against them. That's why their dance is such a revelation, because it breaks through the grim reality of their lives for one joyous, life-affirming moment. It should shatter the pervasive oppression. But we're missing the oppression here.

Among the cast, Fiona Stephens and Jaimie Taylor stand out as sisters Kate and Maggie. Kate is the most serious and responsible sister, and Stephens does an excellent job of giving her enough pride and enough backbone as well as a sense of underlying despair. She's the one who feels the burden.

In contrast, Taylor's Maggie is the family jokester, the one brimming over with life, the one who livens things up for her sisters and for the audience. Taylor is a breath of fresh air in the role.

Dancing at Lughnasa is a beautiful play, and this is certainly a beautiful production. It's so pretty to look at that you want to love it. But I think the play is deeper than this.

DANCING AT LUGHNASA
By Brian Friel