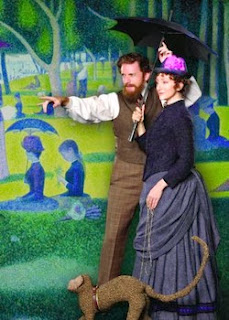 I saw that Sunday, and it was a beautiful and emotional experience. I chose to end my end-of-the-year post with it, as a matter of fact. Jeff voters chose this Stephen Sondheim/James Lapine show as the best musical of the year in the "large production" category, and also honored director Gary Griffin. Although stars Jason Danieley and Carmen Cusack (seen at right) were nominated, the awards for best actor and actress in a musical went to Bill Larkin for his performance as Edward Kleban in A Class Act at Porchlight and Christine Sherrill in Sunset Boulevard at Drury Lane. A Class Act and Porchlight also won the "midsize" musical award, with Callie Johnson's performance in Pal Joey at Marriott honored as best cameo and Alexis J. Rogers' work in Lady Day at Emerson's Bar and Grill at Porchlight named best solo performance.

Steppenwolf's Good People took top honors as the best play by a big theatre, but William Brown, who directed The Liar for Writers Theatre, was named best director of a play. Still, Good People star Mariann Mayberry, who also happens to be an alum of Illinois Wesleyan University, was honored as best actress for her terrific work as a blue collar Boston woman whose life has hits the skids. And Michael Shannon, whose career has blown up big-time, won best actor in a play for Sam Shepard's Simpatico at Red Orchid Theatre, his stomping grounds before Hollywood and Broadway came calling.

Awards in the supporting categories for plays went to Raymond Fox for Blood and Gifts at TimeLine and Elizabeth Ledo for Tartuffe at Court Theatre. TimeLine also picked up the best "midsize" play award for its production of Moises Kaufman's 33 Variations.

The Second City Guide to the Opera, a collaboration between Second City and the Lyric Opera, was named best revue, with director Billy Bungeroth also honored. Best actor in a revue went to David M. Lutken, who played Woody Guthrie in Woody Sez: The Life & Music of Woody Guthrie, a revue at Northlight Theatre in Skokie.

Best ensemble was the cast of Othello: The Remix at Chicago Shakes, and best new work was shared by Luis Alfaro, for Mojada at Victory Gardens, and Rajiv Joseph, for The Lake Effect at Silk Road Rising.

You can see all the complete list of nominations and winners here, including all the technical awards and the best choreography honor, which went to Linda Fortunato, choreographer of 42nd Street at Theatre at the Center in Munster, Indiana. Fortunato's father is Jerry Parsons, longtime teacher and coach at Normal U-High, and her mother is Marcy Parsons, who is involved with Illinois Voices Theatre and could be found again volunteering her services at the Discovery Walk at Evergreen Cemetery last month.
Posted by JulieK at 1:56 PM