"Adaptation" and "Alice" This Week at IWU 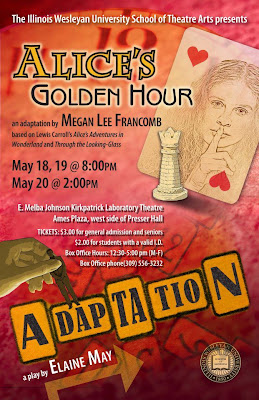 The Illinois Wesleyan School of Theatre Arts completes its season this week with a double-bill of Elaine May's "Adaptation," directed by Peter Studlo, and an original version of Lewis Carroll's "Alice in Wonderland" books called "Alice's Golden Hour," written and directed by Megan Lee Francomb. Studlo and Francomb are graduating seniors in IWU's Theatre Arts program.

May's "Adaptation" was a staple on the stage in the 70s, when this kind of inventive satire was all the rage. May combines elements of the game Parcheesi with Shakespeare's "Seven Ages of Man" speech to create a sharply funny look at how life plays out in all its humor, insanity and quirks of fate. May set up her "Adaptation" with only four actors playing a variety of characters, including a taxi driver, college students, Conrad Hilton and a psychologist named Jo Jo, to show how Man (and Woman) move from the "mewling and puking" infant stage to "whining school-boy," lover, soldier, wise "justice" in maturity, "pantaloon" who is past his prime and beginning to be a bit ridiculous, and finally, a child again as he approaches death "sans teeth, sans eyes, sans taste, sans everything." Yeah, that doesn't sound too funny, but May's Parcheesi/Shakespeare approach is both biting and hilarious.

Lewis Carroll's "Alice's Adventures in Wonderland" and "Through the Looking-Glass," often just called "Alice in Wonderland," have been adapted for the stage and screen many times, including a silent film, an all-star Paramount version with W.C. Fields and Cary Grant, the Disney cartoon, a stage version by Eva Le Gallienne that opened on Broadway in 1933 and was revived in the 40s and again in the 80s, each time with Le Gallienne herself as the White Queen, a very different version conceived by the Manhattan Project and directed by Andre Gregory, where audiences entered the theater through an entrance meant to feel like the rabbit hole Alice fell into, and "Lookingglass Alice," a signature piece from Chicago's Lookingglass Theatre that adds acrobatics and a high level of visual spectacle to the proceedings. Oh, and there was a Tim Burton/Johnny Depp movie in 2010 that was also quite spectacular visually. The Mad Hatter even showed up on ABC's "Once Upon a Time." Alice never really goes out of style, does she? It will be interesting to see what angle writer/director Megan Lee Francomb takes with the familiar material, what "Alice's Golden Hour" refers to, and just which scenes and characters from Carroll's books she chooses to include. I'm also curious as to whether Francomb will build a rabbit hole for her Alice within the cozy confines of the E. Melba Johnson Kirkpatrick Laboratory Theatre.

Performances of "Adaptation/Alice" begin Friday, May 18, at 8 pm, and follow on Saturday the 19th at 8 pm and Sunday the 20th at 2 pm. For more information, you can call the IWU box office at 309-556-3232 or check out the Illinois Wesleyan Theatre Facebook page.
Posted by JulieK at 3:32 PM