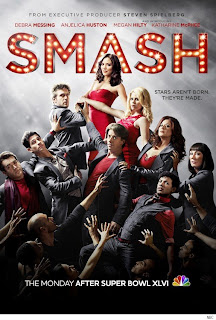 I wasn't crazy about NBC's "Smash" when it premiered in February, as you may recall from a post I wrote about it then. I watched the first three episodes to see if it got any better, decided it was actually getting worse (that third episode was a killer, and not in a good way) and then abandoned it and its nonsensical plots and characters for the sake of my sanity. But then Bernadette Peters and Terrence Mann guested, and I was all, high wattage Broadway stars! How can I not give it another try?

The episode with Peters, where she played a huge Broadway star who also happens to be the demanding mother of the character of Ivy, played by Megan Hilty, wasn't as bad as Episode 3, but then, few things are. And Mann's role was quite small, but he was very amusing as a fairly crazy, hard-living rock star with a whole lot of money he was willing to invest in "Bombshell," the Broadway show inside the show that is supposed to be about the life of Marilyn Monroe.

We heard a few weeks ago that creator Theresa Rebeck, who is a well-regarded playwright as well as a TV producer and writer, would not be coming back as show runner for Season 2, replaced by Josh Safran, executive producer of "Gossip Girl." And now there's news that Rebeck is leaving the show altogether. Hmmm... Is this in response to critics and complainers, who think that "Smash" could and should be a lot more than it is, who don't understand how it's even possible to waste the talents of this many cool people or get this far off track?

Because of these developments, and also because a) I still have friends who are watching it in some sort of love-to-hate/hate-to-love relationship, b) the Tony nominations were announced this week, including a nod for Christian Borle, one of the three actors I have found myself enjoying in the episodes of "Smash" I've seen, and c) I wanted to judge for myself if there's a kernel of anything to be saved here in a second season without Rebeck, I gave it yet another chance and tuned in last Monday.

In this week's episode, "Bombshell" found itself in Boston preparing for its out-of-town tryout, with everyone on edge because of Tech Week (you'll certainly get used to hearing that phrase if you see the episode), romantic complications on every side, and an egotistical and immature movie star (played by Uma Thurman) brought in to take on the lead role of Marilyn, shoving aside both prior contenders. (Before the movie star, we had Ivy, the Broadway veteran who desperately wants to be a star, versus Karen, the sweet and simple ingenue from Nowheresville, right out of the Ruby Keeler playbook in "42nd Street.") This week, we got more betrayal, more eavesdropping, a few sexy encounters, and pretty much every subplot you've ever seen on a soap opera except maybe amnesia and an evil twin, although I have seen some commenters speculating that maybe the character of Derek, played by Jack Davenport, fulfills the evil twin thing because he seems to be at least two people given the whiplash way his character is written.

None of the plots reflect anything I know about Broadway, except for the bringing in of a star to make the producers happy. In fact, that one feels kind of meta with Katharine McPhee, who finished second on ratings juggernaut "American Idol" a few years ago and probably seemed like a sure thing to NBC when greenlighting this show. I can just see the meeting where some suit says, sure, it looks like fun, but we can't rely on these Broadway people no one has heard of in Middle America, so let's boost the star power, okay? And somebody on the production side says, well, we have Oscar-winner Angelica Huston and dishy Brit Jack Davenport and sitcom star Debra Messing. Isn't that enough? And the suit said, uh, no, we need someone with a proven Q score, someone like Britney or Miley or one of those Disney girls -- the Vanessas and Demis and Selenas -- or, wait, I know! There has to be some leftover pretty girl from "Idol"!

Which is exactly how we are led to believe that Uma Thurman's Rebecca Duvall was brought into the "Bombshell" mix and why, even though she can't sing or dance, doesn't even appear to be a very good actress, and is a royal pain at every turn, they can't get rid of her. But, see, this makes no sense, either. I thought that the episode with Terrence Mann showed Anjelica Huston burning her bridges with the money men who'd demanded a star like Rebecca and depending instead on Mann's rockstar Randy Cobra. He didn't seem like the kind of guy who would care who the star is. So why can't they boot out Rebecca, now that the bad producers are gone and Randy Cobra is bankrolling them?

That's really the least of the logical problems in "Smash," however. The real gorilla in the room is that Megan Hilty has been knocking it out of the park, she looks more like the real Marilyn, and it's pretty much impossible to take Katharine McPhee's Karen seriously as any kind of competition. That is the main thrust of every episode, and it just isn't working. At all.

So, yeah, still not feeling it.

I love that "Smash" is about Broadway. I love that it employs so many Broadway performers (including the afore-mentioned Borle, Hilty, Mann and Peters plus Becky Ann and Dylan Baker, Joshua Bergasse, Will Chase, Ann Harada, Brian d'Arcy James, Spencer Liff, Leslie Odom Jr., Condola Rashad, Phillip Spaeth, Lewis J. Stadlen, Henry Stram, Tony Yazbeck... And probably ten more people I didn't catch popping up in small roles all over the place.)

I've now discovered that Megan Hilty, someone I wasn't familiar with, is ridiculously talented and can turn even the worst material into gold, that Jack Davenport is just as hot as I remembered from his movies, and that Christian Borle has such a terrific voice and presence it's really a shame they cast him as the songwriter who hardly ever sings. Even so, scenes with Hilty, Davenport and Borle are the most watchable (or perhaps the only watchable) bits and pieces of "Smash."

But the plots are ridiculous, Anjelica Huston isn't doing anything for me, which is depressing, Debra Messing's swampy character and even more awful plot situations bug the heck of me, and Katharine McPhee makes Karen, the rival for the role of Marilyn, pretty much a black hole of charisma, sucking everybody else in so that otherwise adorable actors like Raza Jaffrey, who plays her boyfriend, seem just as dull as Karen. Everybody keeps pounding us over the head with the notion that Karen is a shining star in the making, full of sparkle and charm. Instead, I see the same sulky, smug, listless girl I saw back in February.

Can this "Smash" be saved? Maybe if we consider Season 1its out-of-town tryout, if they revamp the book to tighten up the plot and concentrate on "Bombshell" and its fortunes as opposed to so much off-stage stuff, get rid of the movie star and the Ruby Keeler understudy, clarify Jack Davenport's character as one or the other of Derek's multiple personalities, go with the obvious and make Christian Borle's Tom and Brian d'Arcy James' Frank on-stage performers instead of wasting them as off-stage people, and... Hire somebody who can create a decent arc. Somebody who can write, who has a sense of humor and a sense of camp, somebody who knows musicals and musical performers and isn't constantly cribbing from "Gypsy" and "All About Eve" and "Stage Door" and "42nd Street."

I suppose if Larry Gelbart were still alive, he'd be the go-to guy. And it's really too bad Comden and Green are no longer with us. But I'm thinking Paul Rudnick, David Ives or Harvey Fierstein might be an interesting choice to create a bible and a new direction for this show. Throw a little Lisa Kron or Lin-Manuel Miranda or Greg Kotis in there, and you might just have something. Yeah, I know none of this would work with the brass at NBC. We'll end up with more betrayal, more eavesdropping, more sexy encounters, amnesia and evil twins, family drama, even more people singing craptastic pop songs in bowling alleys and karaoke bars, 90% more Katharine McPhee, 90% less Megan Hilty, and 90% less me.

Right now, the off-stage drama of "Smash" is turning out to be a whole lot more interesting than the off-stage drama surrounding the characters putting on "Bombshell." By that, I mean Rebeck demoted and Rebeck out, Debra Messing ending her marriage and hooking up with her co-star, rumors that Megan Hilty has left her long-time boyfriend (Steve Kazee, who just got a Tony nomination for "Once") and may be dating a Jonas brother, and... Well, that's plenty. And I'd still rather see the on-stage "Bombshell" and the insider info of how a show comes to be.
Posted by JulieK at 2:22 PM