Frankenstein X 2: Alternating Scientists and Creatures at the CU Art

When two major stars do Mary Shelley's "Frankenstein" on stage, with one as the ambitious doctor and one as the creature he makes out of spare parts, it's big news. When they flip roles every other night, it's an even bigger event. 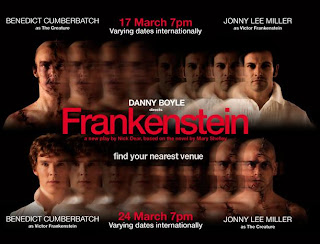 Film director Danny Boyle ("Slumdog Millionaire," "Trainspotting") took on the new stage version of "Frankenstein" written by Nick Dear for England's National Theatre, with Benedict Cumberbatch (the Sherlock of the new "Sherlock" from the BBC and PBS) and Jonny Lee Miller (probably most famous for being Angelina Jolie's first husband, but he was also in "Trainspotting" as well as the TV show "Eli Stone" and the new "Elementary" slated for CBS this fall) alternating in the roles of the famous Dr. Frankenstein and his monster. That meant fans could choose who they wanted to see as whom, or go back to the NT to see both. In the end, the two actors shared the Olivier Award for Best Actor in a Play for their combined efforts as Dr. F and the Creature.

This "Frankenstein" was also picked up by the NT Live program, which takes filmed versions of National Theatre stage productions and sends them around the world to movie theaters. They've already done that with "Frankenstein," but this one was so popular they're giving it an encore, with the two "Frankensteins" back in movie theaters in June in the US.

The trailer for the encore is embedded below for your viewing pleasure. Although I'm not sure how pleasant it is, with this rather more realistic representation of what a person might look like if they'd been stitched together from bits and pieces. It also makes it clear that Nick Dear's adaptation is about what it means to be alive, the burdens of responsibility and guilt, and the very root of good and evil.

The National Theatre Live program is simply the best idea ever, and I'm hoping everybody buys tickets to say thanks to the Art Theater for stepping up and giving us a Central Illinois venue. You rock, The Art!

You can follow all the links here for more information, more trailers, and the Art Theater's schedule.
Posted by JulieK at 10:48 AM