Because I grew up in the 60s, I mostly knew Buster Keaton as a strange old man in different politically incorrect garb lusting after girls in bikinis (see image below -- that's Buster as Chief Rotten Eagle in "Pajama Party," and he was also in "Beach Blanket Bingo" and "How to Stuff a Wild Bikini") or running around the hills of Rome in "A Funny Thing Happened on the Way to the Forum," the last movie he made before he died. He was also memorable as one of the "waxworks," washed up silent film stars playing cards at Norma Desmond's mausoleum of a mansion in "Sunset Boulevard." 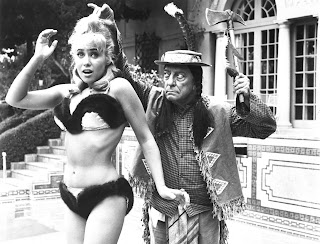 But when I hit film classes in the 70s, I found out that the real Buster Keaton, the young Buster Keaton, filmmaker, comedian, acrobat, writer, leading man Buster Keaton, was a totally different kettle of fish. Roger Ebert used the phrase "graceful perfection" to describe Keaton's silent films of the 20s, and I think that just about sums up the appeal of Keaton himself.

He has such grace and presence, especially in "The General," the silent feature film on screen last night and again tonight at the Normal Theater, that his physicality, that smooth, death-defying agility, informs every frame. It's there every time he slides on and off the train, as he fools around with a sword that won't cooperate or tries to figure out how a top hat stuck in a tree can pop on and off his head, as he balances on the cow-catcher on the front of the train, tosses a wooden railroad tie at another huge plank stuck on the track, hits the exact right spot on the end, and flips both of them out of harm's way, all while trying to avoid being shot by an errant cannon...Perfection.

But Keaton's Little Guy Who Could, all stoic, straightforward determination to get back his train and win the girl in "The General," is more than just physical prowess or acrobatic stunts. Yes, he did all those stunts himself. Yes, he created the gags and ran the train and fit everything into an airtight plot that never stops moving. Yes, the sight gags and special effects (there's a whole train that falls into a river, after all) that he concocted are amazing. But he's also acting here, creating a character, showing exactly how Johnnie Gray, the Confederate train engineer who won't give up, can be ingenious, heroic, bashful, clumsy, engaging, sweet, funny and kind of a hottie, all at the same time.

And remember, "The General" is a silent film, so everything we get, we have to read from Keaton's face, which was so notably devoid of expression that he was dubbed "The Great Stone Face." But there is a lot more going on on that stone face that you might think. Just keep your eyes on Buster as Johnnie, a little nervous as he polishes his shoe on the back of his other pantleg before knocking on his girl's front door, unsure of the gentlemanly thing to do when he sneaks in a window and has to wake her up to rescue her, and then there's a scene I absolutely love, when they are trying to get away on the train, and he tries to get her to help out. He motions to her to put some wood in the boiler, and she chooses a narrow stick -- way too small and a waste of time -- to throw in there, after which he looks aggrieved and mocks her by handing her a really teeny-tiny sliver, even sillier than the one she just picked. But she doesn't get it, happily taking the sliver and adding it to the boiler. Now he's really disbelieving that she can be so stupid, and he sort of strangles her for half a second before changing his mind and kissing her instead. It's adorable, in a weirdly unsentimental and surprising way, that he recognizes that the girl of his dreams is a dim bulb and pretty much no help in their desperate escape from the Yankees, but he still loves her, anyway.

"The General" shows up on all kind of All-Time Best Movie lists, silent or otherwise, but it isn't the only Keaton classic out there. I hope the fact that the Normal Theater thought it worthy of their big screen means that maybe they'll look to "Steamboat Bill, Jr." and "The Navigator" and "Sherlock Jr." and "The Camerman" in the future. Plucky little Buster Keaton, an auteur before the idea existed, deserves no less.

And if you're in a Buster Keaton mood, Roger Ebert's thoughts on "The General" and Keaton's oeuvre in general are also worthy of your time.
Posted by JulieK at 3:41 PM