On TV: My Faves Are Safe!

Although my TV watching has been spotty at best this season, I have kept up with a few things I've become attached to. So while "House" has dropped off my radar as it winds to a conclusion (love Hugh Laurie, love Robert Sean Leonard, will not watch them kill off Wilson as they wrap up the show 4-Eva) and I decided to quit "The Office" when it and new characters Robert California and Nellie somebody-or-other annoyed me beyond the point of redemption, I have found some new shows I like a lot. As it stands, as pretty much everything on TV pulls out all the stops for May sweeps and their season finales, I think all my faves have now been pronounced safe for new seasons. I will say a small "Hurray!" for that.

On ABC, a network I am still mad at for canceling my soaps (Oh, "One Life to Live," how I miss you!) they've taken a small step back into my good graces by giving me "Once Upon a Time," the show that throws fairytale characters like Rumpelstiltskin, Snow White and her Prince Charming (and even the Mad Hatter, which defies explanation, since "Alice in Wonderland" is not a fairytale) into a small town in Maine, most of them with no memory of their previous lives in magical realms. "Once Upon a Time" has been a big success for ABC on Sunday nights, so it's no surprised it's gotten the official pick-up for next season. Things have gotten good as the curse that trapped them all in Storybrooke, Maine, begins to crack, and I'm all primed for the Season 1 finale on Sunday. 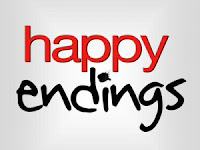 I've also enjoyed "Happy Endings," in its sophomore season as a sort of "Friends" for the New Millennium with a married couple, a black guy and a gay guy. It's funnier to me than "Friends" ever was, it's set in Chicago, and I'm ever so glad it'll be back with new adventures for its sextet of friends. I'm also hoping that daffy Penny, played by Casey Wilson, gets a hot boyfriend next fall. Come ON!

"Scandal," an inside-politics show about a fixer who finds herself knee-deep in muddy waters (Presidential sex scandals! Lies! Rumors! Murder! Adultery! Wiretapping! Psychopathic staffers!) was less of a sure thing that either "Once Upon a Time" or "Happy Endings." Like, a lot less, given that its ratings have been nothing to write home about and it only got a seven-episode first season. But ABC has officially renewed it, too, meaning Kerry Washington (playing PR maven/lawyer Olivia Pope, whose name was referenced at least a hundred times in the pilot) and Tony Goldwyn (the Prez) can continue to heat up the small screen well into the forseeable future.

Way to go, ABC, for keeping these three around!

Over on NBC, home of several good, if seriously under-watched, comedies, I was definitely worried about my fave "Parks and Recreation," which is way too amazing a show to still be struggling in the ratings in its 4th season. Amy Poehler's adorable Leslie Knope just won her race for city council, her adorable boyfriend Ben, played by Adam Scott, has just accepted a position running a campaign in Washington DC (Let's hope he doesn't run into Olivia Pope or any of the criminals she hangs around with!), and Ron Swanson, U of I's own Nick Offerman, declined a promotion of his own. Cliffhangers, people! We need to find out what will happen to Leslie & Co. as they rock Pawnee, Indiana, in the fall. And now we will, with "Parks and Recreation" cleared for 22 episodes in Season 5. This is extremely good news, almost as good as Leslie beating doofus Bobby Newport (Paul Rudd) in that election. I hope we get to see more of the moronic Newport, though.. Rudd was great.

NBC's other Thursday comedy, the equally oddball and equally terrific "Community" has been picked up, too, although only for a 13-episode 4th season. "Community" continues to take chances with its format and storylines, and it deserves to be rewarded for that. So I'll take a 13-episode season if the alternative is no more crazy Community college antics from the world's weirdest (and longest-running) study group. They're never going to graduate, are they? Well, maybe Chevy Chase's character will graduate. Or get killed. Or something. Chase and creator Dan Harmon were feuding as recently as April, so it won't be a surprise if he isn't there when "Community" returns.

While looking over the renewal scorecards out there, I discovered that I don't watch anything on Fox, CBS or the CW. So whatever they're canceling or not canceling, I don't much care. My shows are safe. All is right with the world.

Note that the other shows I like -- including "Downton Abbey" on PBS, "Psych" on the USA Network, and "Leverage" on TBS -- aren't listed because their seasons and networks are different. As far as I know, all three of those will keep keeping on, with "Leverage" airing new episodes in July, "Psych" coming back with another 16-episode season later this year, and the third season of "Downton Abbey" expected to air in the US in January, 2013. I'm also mad for "Mad Men," which is in the middle of its 5th season now, with a 6th season in the works, presumably to air beginning in '13.
Posted by JulieK at 2:52 PM

Email ThisBlogThis!Share to TwitterShare to FacebookShare to Pinterest
Labels: ABC, Community, Happy Endings, NBC, Once Upon a Time, Parks and Recreation, Scandal