"Tell Me on a Sunday" Has Its One Woman

The musical "Tell Me on a Sunday" (music by Andrew Lloyd Webber, lyrics by Don Black) is a one-woman show. Or a one-girl show, since I believe the one role in the show is usually simply called The Girl. 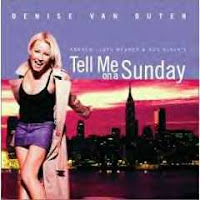 That "Girl" has been portrayed by Marti Webb, Lulu, Sarah Brightman, Bernadette Peters, and most successfully, Denise Van Outen (seen at left), the British blonde who served as one of the hosts of NBC's "Grease: You're the One That I Want!" and the BBC's "Any Dream Will Do." The latter show was looking for a new Joseph for a West End "Joseph and the Amazing Technicolor Dreamcoat," after which Ms. Van Outen married Lee Mead, the winning contestant. I haven't got a clue how I managed to watch all the episodes of "Any Dream Will Do," considering it was only broadcast in England, but sometimes the internet is a magical place.

In any event, "Tell Me on a Sunday" was significantly (and successfully) rewritten and refurbished for the 2003 London production that starred Van Outen, and that version has become the official one used all over the world. "Tell Me on a Sunday" is the musical story of one British girl's journey across the US, looking for love, meeting men, facing disappointment, and eventually, maybe finding herself. The songs "Take That Look Off Your Face," "Unexpected Song" and "Tell Me on a Sunday" have emerged as the best-known pieces in the score, which has been called one of Lloyd Webber's best..

Soprano Natalie K. Stephens, who arrived in Bloomington-Normal in the summer of 2011, kindly dropped me a note to let me know that she has been cast as the Girl, the one woman on stage who carries the whole show, in the Prairie Fire Theatre production of "Tell Me on a Sunday" opening June 29. This is exciting news for Stephens and for those of us who'll be seeing (and hearing) her for the first time.

According to Stephens, "Tell Me on a Sunday" will be her Prairie Fire debut, as she stars in performances June 29 and 30 and July 1, 2012, all scheduled to be performed at St. John's Lutheran Church in Bloomington. She also fills in a few blanks on the technical side, noting that "Sunday" is directed by Cyndee Brown, with Tim Pitchford acting as conductor and Julie Kasa as musical director.

Natalie Stephens received a Master of Music degree in Vocal Performance at SIU in Carbondale, and a BFA in Music Theater from Elon University in North Carolina. She also studied opera and voice in Perugia, Italy with Carmen Gonzalez. Stephens was also a soloist in the premiere of Dr. Frank Stemper's "A Brief Message from Makanda, Illinois" at Orchestra Hall in Chicago, and last Christmas, she sang in State Farm's Sounds of Christmas with the Groove Emperors jazz group.

Stephens currently offers voice lessons, does photography, and keeps a blog, all under the umbrella of Blossom Studio @ 309.

Email ThisBlogThis!Share to TwitterShare to FacebookShare to Pinterest
Labels: Natalie K. Stephens, Prairie Fire Theatre, Tell Me on a Sunday