Gregory D. Hicks, who will be directing Lynn Nottage's "Fabulation, or the Re-Education of Undine" for New Route Theatre, has announced that he will be holding auditions for roles in the show on June 4th, 5th and 6th from 6 to 10 pm at the YWCA theater space New Route is now calling its own. 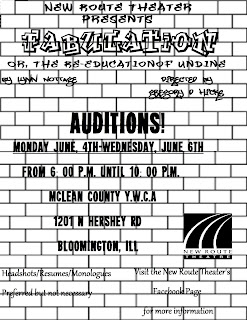 Hicks previously directed the one-night workshop production of the play New Route produced in July of 2011. That production had limited space for scenery or lights, but it still clicked in all the right places and showcased the style and the message in Nottage's funny, sad, pointed script. With more resources and an expanded run, the new "Fabulation," scheduled for performances on August 31, September 1, 2, 7, 8 and 9, should be even better.

"Fabulation" involves one Undine (birth name: Sharona) who has chucked every connection to her old life in the projects as she climbed the ladder to success. But now the Fates (and a cheating, stealing boyfriend) have pulled the ladder out from under her, and Undine has to figure out who Sharona was before she can be a new, stronger, better Undine. She needs a re-education. And life is going to hand her one whether she wants it or not.

Nottage is a Pulitzer-Prize winning playwright whose work is smart, stylish, emotionally grounded, psychologically rich and quite powerful. Her plays leave an indelible mark on your psyche, and you'll be thinking about the issues she raises -- love, romance, self-worth, ambition, identity -- long after you leave the theater.

Hicks says he is looking for 4 men and 5 women to play roles ranging from Undine herself to various family members and people Undine meets along her route from hot-shot PR woman to out-of-work and out-of-luck nobody. That includes inmates, support group folks, co-workers, lowly bureaucrats, rappers, doctors, judges, and Undine's wily, heroin-addicted grandma.