An Intriguing Combo: "Alice" and "Adaptation' at IWU 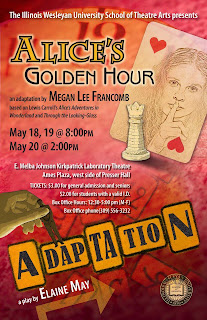 I have tried in vain to figure out who wrote the "open theater" version of "Alice in Wonderland" we performed as a one-act at my high school in the 70s. We had a lovely little raked stage painted with black and white squares, and everybody stayed on stage the whole time, pulling props out of a trunk, wearing makeshift patchwork costumes with simple changes (a pop-up top hat to signal the Mad Hatter, a bunch of opened umbrellas to create a forest), with Alice staying Alice throughout, but the rest of the ensemble moving from familiar characters like the Red Queen and the Cheshire Cat to croquet wickets or a table or a pinball flipper as needed. (We interpreted the trip down the rabbit hole as a pinball game, with actors as bumpers and flippers.)

It was very much a piece of that "Godspell," "Story Theatre," "Hair" era, where congenial, slightly loopy flower children lit the stage with their positive theatrical energy instead of fancy lights or sets or costumes.

It's interesting that Illinois Wesleyan's School of Theatre Arts decided to close out the 2011-12 season with two pieces that really speak to that late 60s/early 70s style, with a definite flower child take on "Alice's Golden Hour," a streamlined version of the two "Alice in Wonderland" books by director Megan Lee Francomb, and a flash of the past in Elaine May's "Adaptation," directed by Peter J. Studlo.

Both Francomb and Studlo are graduating seniors (or newly-graduated seniors) and in program notes, they both reflect on the bittersweet notion of leaving IWU behind them, moving into adulthood outside the college cocoon. Those emotions and the idea of moving on certainly show up on stage, as Alice stumbles around in Wonderland, getting smaller and bigger and meeting up with a whole bunch of strange new characters in her life, as Phil, the contestant in "Adaptation," moves around the gameboard that is life to try to achieve maturity points.

Francomb's adaptation of "Alice," which she calls "Alice's Golden Hour" to echo Lewis Carroll's original thoughts on his material as well as Francomb's idea that youth is our Golden Hour, draws mostly from "Alice's Adventures in Wonderland," the first book, with the flower characters near the beginning of "Through the Looking Glass" pulled in as well.

In costumes and music choices, Francomb goes for a 60s mood, a little psychedelic and far-out, man. She also has some fun ideas on how to stage her scenes, with the Cheshire Cat (Marek Zurowski), the Caterpillar (Kate Rozycki with a little help from her friends) and the Lobster Quadrille (led by Nick Castellanos), all accomplished nicely. I especially liked the choreography in the Lobster Quadrille. Alice herself, played by Kate Fitzgerald, is pretty and sweet, more of a normal girl without the trademark blonde hair and headband and the blue dress. An Alice in shorts is very welcome.

My only quibble is one that often happens with Alice -- her adventures are by definition strange and nonsensical, certainly not going neatly from Point A to Point B or C, and it's hard to get the idea of an emotional journey or sense of maturing out of it.

"Adaptation" is quite the opposite. Its journey is built in, working off Shakespeare's Seven Ages of Man, as we see a contestant, one Phil Benson, supposedly plucked from the audience, as he tries to win the "Adaptation" game by moving from infant to schoolboy to college kid to career man, husband and father, experiencing setbacks, winning prizes, and finally making it to the end.

Studlo also has some creative ideas, using painted blocks to move Phil (well played as a sweet Everyman by Jordan Lipes) around the board and some simple props and costume pieces (lots of hats and a few aprons and shawls) to show us all the people he runs into during the game. The Game Master (Chantericka Tucker) mostly tells him what to do and where to go, although she does step into the action a few times, but most of the characters are portrayed by the two Players, with Jenna Haimes doing good work as Phil's dad and son, friends and girlfriends, and Halimah Nurullah filling is as his mom and wife, as well as his counselor, friends and teachers. That's pretty heavy lifting for both Haimes and Nurullah, and they manage it nicely.

Although the game they're playing is billed as Parcheesi in the original play, that's not really what we see here. "Adaptation" uses the same set (round playing space filled with squares in shades of brown and a nifty circular stair) as "Alice," which means there isn't a specific game board to move Phil around. That's a problem, I think, since there isn't anything particularly gamey about any of the surroundings, and it's easy to lose sight of the fact that a board game is the conceit here.

Or maybe a board game is too old-fashioned. And maybe Elaine May's script, with its talk of college deferments and Kahlil Gibran's "The Prophet," is too firmly rooted in 1969 to really be on target for today's 20-something. After all, there are no computers in "Adaptation," let alone texting or Facebook or Twitter or viral videos. I'm thinking that today's Phil Benson is likely to be more "Grand Theft Auto" than Parcheesi, more Occupy Wall Street than SNCC, more Jay-Z than Dore Schary.

Still, May's script is funny and pointed in the right places, and worries about affording a mortgage and getting into the right college or making the right connections never seem to go out of style. More's the pity.

ADAPTATION
By Elaine May
Directed by Peter J. Studlo