Falling, the play directed by Illinois State University professor Lori Adams, has officially opened Off-Broadway. Playwright Deanna Jent wrote Falling, about a family trying to find ways to stay a family while dealing with the challenges of an autistic child, and the play received great notices when it began its life in St. Louis, where Adams received Best Director honors from St. Louis Post-Dispatch critic Judith Newmark and the play itself took the 2012 Kevin Kline Award for Best New Play. Those notices were strong enough to earn it an Off-Broadway production at the Minetta Lane Theater, where it's been in previews, with opening night last night.

Reviews are beginning to trickle in, and they're stellar. In today's New York Post, Frank Scheck notes that "this heartfelt and nuanced family drama is shot through with dark humor, as cathartic for the audience as it is for its conflicted characters," and he calls the action "superbly staged" by Lori Adams.

Rex Reed opens his review in the New York Observer by praising the play's "Graceful writing, great acting, exquisite direction, suspense, [and] profound subject matter..." before concluding that Falling "teaches you something and leaves you sated—and it rocks."

At Talkin' Broadway, Matthew Murray writes that Falling is a "meticulously crafted and intensely moving play, given a sterling production by director Lori Adams."

The New York Daily News also put Falling in the No. 2 spot on its list of "top 10 things on New York stages" for this week.

You can also see interviews with the cast, including lead actress Julia Murney, on this page at Broadway.com, and see pictures and ticket information at Playbill's online site. Testimonials for the play have been posted on Youtube, if you're interested in the reactions of real-live audience members.

Note that $5 from each full-price ticket purchased for performances in October will benefit Autism Speaks, the world’s leading autism science and advocacy organization.

If you, like me, are unable to get to New York in time to see Adams' Off-Broadway directorial debut, you can enjoy this picture of the marquee for the show, as posted at Playbill online. Beautiful! 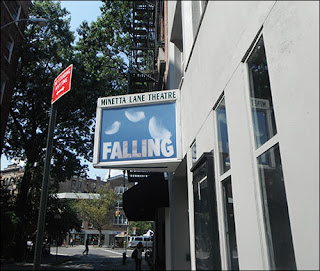