Local musician and guitar master Alister Smith has announced that he will be returning (not just returning, but triumphantly returning) to "the place where I cut my teeth and electrocuted my lips on my first ungrounded microphone." 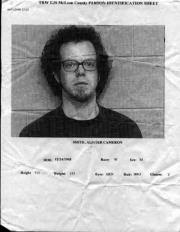 Although he will not actually be playing at the Gallery (where he cut his teeth and electrocuted his lip), Smith will be playing at the Firehouse Pizza and Pub on Beaufort Street in Normal, which he figures to be as close to the old Gallery as he's going to get in 2012.

All of this happens on Friday, February 10, at approximately 9 pm, when Smith opens for the singer from the band Moto and Mike Felton, an acoustic/blues/folk rock performer from Chicago.

For more information, you can visit Alister Smith's Facebook page for the event here, or check out Firehouse Pizza and Pub here.
Posted by JulieK at 10:46 AM