Quirky and Tart, "Cloud 9" Pushes the Right Buttons at ISU 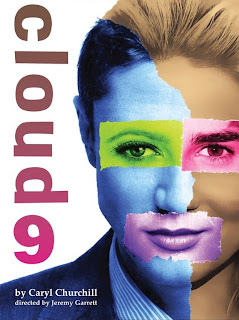 Bending gender, time, age, skin color and everything else you can think of, Caryl Churchill's "Cloud 9," on stage at Illinois State University's Westhoff Theatre, is all at once political, sexual and very, very tart.

Churchill begins "Cloud 9" in Colonial Africa in the 19th century, with Victoria on the throne of England and a whole lot of white male domination going on. We see the household of Clive, a pip pip cheerio British type, complete with pith helmet, sent by the Queen to rule over this small piece of her empire.

The biggest quirk of the play (and there are a lot of quirky bits in "Cloud 9") is the casting. In Act I in Africa, Churchill specifies that a male should play Betty, Clive's lovely wife, a female should play little Edward, Clive and Betty's son who shows traits of femininity that are disturbing to his parents, like being attached to a doll, and a white actor should play Joshua, the African servant who defers to almost anything and everything his white overlords demand. It's all part of her overall theme, to show how the rigid dictates of Colonialism create identity confusion on all levels, as Betty and Joshua have become completely defined and controlled by the white male power structure around them.

Act II takes us to England in the 1970s, showing the same characters, but only 25 years older and now played by different actors. Betty is now played by a woman (at ISU it's the actress who played the governess in Act I) and Edward is now played by a man (Clive from Act I). Meanwhile, the actor who played Joshua takes on the role of a rambunctious little girl named Kathy as well as the ghost of a soldier who died in Ireland, the new Africa in terms of British imperialism.

So not only are the genders switched up in this heady swirl of men, women and children, but they are turned around again when the actors take on new roles in Act II, and more fluid sexuality is explored, with homosexuality and bisexuality added to the mix in the less restrictive 70s.

Churchill paints her characters in vivid colors, pushing at the boundaries of stereotypes for humor and shock value. For ISU, director Jeremy Garrett gets the message across quite nicely, keeping his actors moving as they switch identities and costumes on a dime, and in the end, creating characters who feel real against all the chaos.

The cast of "Cloud 9" has to be an ensemble or Churchill's ideas will never get off the ground, and Garrett's cast works hard to deliver. When it comes to energy and take-no-prisoners attitude, they all go for it.

Individually, Andrew Rogalny Jr. is hilarious and robust (as well as horrifying) as Clive the Lord and Master (whose mustache is like a character of its own) and then sweet and tentative as adult Edward, who finds the real him as a housewife; Danny Rice does quite well traversing the distance between languid, confused Betty and slimy pick-up artist Gerry; Hannah Brown is all perk and pep as little Edward, but quite lovely as Victoria the bisexual wife; Nicholas Spindler is decidedly odd as implacable Joshua the black servant and even odder as hyperactive Kathy who drives her mum crazy; Abby Vombrack is all stern warnings as Betty's mother, adding softness and confusion to get to Lin, the lesbian who has a thing for Victoria; and Alex Kostner gets the unenviable task of playing omnisexual Harry the Explorer, who seems to have sex with everyone and everything he can get his hands on in the wilds of Africa, and then unpleasant Martin, who blames his wife's unhappiness and his own cheating completely on her. Fiona Stephens deserves special mention for dashing on and off with split-second changes between Ellen, the governess, and Mrs. Saunders, a widow with a mind of her own, in the African section, and then playing Betty, just now trying to figure out who she is, in 1970s England. And creating whole characters for all three of them. I don't know how she managed the costume changes, let alone the character changes, between Ellen and Mrs. Saunders, but kudos to Stephens for making it work.

Andrew Sierszyn's set design, with revolving blocks of scenery at the back of the stage, is bold and fun, illustrating the turns the characters are taking, and JM Montecalvo's lighting design adds texture and color, as well. The array of costumes, designed by Sandy Childers, creates instant associations for the characters, which is very helpful when they keep switching personalities.

All in all, "Cloud 9" is a tricky show that will not be to the liking of all audiences. But for those who like their theater quirky, pointed and thought-provoking, with a huge dollop of sarcasm and sexual button-pushing, "Cloud 9" may be just the ticket.

Running time: 2:25, including one 15-minute intermission

For ticket information, click here.
Posted by JulieK at 1:31 PM