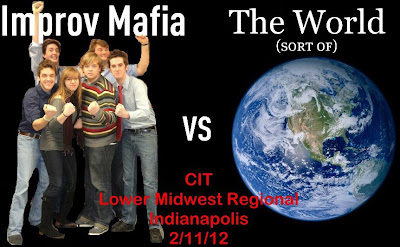 The Improv Mafia won the Lower Midwest Regional last year, as well. This year, they defended their title in Indianapolis, earning the right to compete for the national championship in March in Chicago. That makes the Improv Mafia one of 13 regional champions, chosen from a field of 110+ teams nationally.

The Improv Mafia began in 1998, created by Mikel Matthews, who is now over in Champaign acting and directing. The Improv Mafia website tells us that they have "evolved over the years from performing mainly short form games to providing a unique hybrid of short form, long form, musical, and other experimental forms in their weekly one hour shows." (The weekly shows are on Tuesdays, by the way, at the CPA Art Room 145.) Clearly, their hybrid is working, with a National Championship in 2008 and 2nd place at Nationals in 2010-11.

You can see video of their first-round performance here, here, here and here. It's a little jumpy and not complete, but it will give you an idea of what they were doing in Indianapolis, anyway.

As for who was on the winning team, well, I haven't been able to find their current roster anywhere, but I think I spotted Andrew Bogue, Mitch Conti, Carly Heiser and Jason Raymer in the video. If anybody from the Improv Mafia wants to stop by and correct that or offer more complete credits, feel free! Here's the 2010-11 group if you'd like to play Match the Faces with the video.

In the meantime, congratulations and felicitations to ISU's elite improv troupe!
Posted by JulieK at 2:12 PM