Okay, maybe it is the rhyming couplet thing.

Most translations of "Tartuffe" keep the couplets, including the one by Richard Wilbur, which is considered to be high on the list of top translations of Molière's work. But those couplets... Actors have a tendency to fall into a singsong rhythm, to sink into the rhymes, losing the sense of their lines. But without the rhymes, it doesn't feel like the complete Molière experience. And that's what makes it so tough to pull off.

What's it all about? As you might expect, it's about a man named Tartuffe, a greedy hypocrite pretending to lead others on the path to virtue while feathering his own nest at every opportunity. A wealthy man named Orgon is now buying whatever Tartuffe is selling, hook, line and sinker; he is so thoroughly smitten that he is willing to put Tartuffe before his lovely wife, Elmire, his children, and any semblance of good sense, no matter how much his family and his servants, including saucy maid Dorine, protest. Even though Tartuffe doesn't really hit the stage until almost an hour in, he is still the center of attention, as foolish Orgon refuses to see what a dupe he has become.

Illinois Wesleyan's current production of "Tartuffe," directed by Nancy Loitz, looks very good. Curtis Trout's elegant set is simple and smart, using pillars and a chair or two instead of the overdone Frenchified drawing rooms with ten or twelve doors and a million knickknacks you normally see when Molière is in play. Marcia K. McDonald's costume design is also smart, sticking to the period and identifying characters through color (Elmire sizzles in an orangey pink, while ingenue Mariane gets pale yellow) and level of frippery. I was a little surprised to see Tartuffe himself, the fake pinnacle of piety, not decked out in all black like the Puritan he pretends to be (or the one you see in IWU's poster shown below). 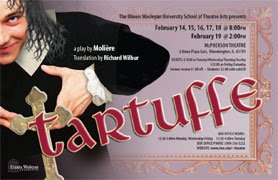 As played by Chase Miller, this Tartuffe looks pale and waifish, with long, lank hair and a pronounced limp. He's been described as red and round and rosy, but he is decidedly not. Miller gives his all to the role, but he looks more like the Aqualung cover than a 17th century religious leader.

TARTUFFE
A play by Molière
Translation by Richard Wilbur