Yes, February is here, whether we like it or not. It's certainly coming in as a nicer February than last year, when we were in the midst of the Snowpocalypse. I'll take Very Warm for February, thanks.

First up in February: The Black Actors Guild at ISU presents "Purlie Victorious," also known as "Gone Are the Days!" with screenings in Milner Library Room 164D on February 1 and 6 at 7 pm. This 1963 movie, with a screenplay by Ossie Davis adapted from his stage play, stars Davis himself as Reverend Purlie Victorious Judson, who returns to the Southern plantation where he grew up, with his fiancee (played by Ruby Dee, Davis's real-life wife) in tow, hoping to build a church and by hook or by crook pry an inheritance out of a bigoted plantation owner (Sorrell Booke, known from "The Dukes of Hazzard") and his more progressive son (Alan Alda, in his first film role). 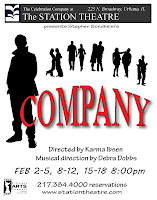 The Sondheim/Furth musical "Company" opens the month for the Station Theatre, bringing bachelor Bobby and his search for emotional connection back to Urbana from February 2 to 18. Featuring the soaring"Being Alive" as well as the comedy showstopper "Getting Married Today," "Company" is a very entertaining, thought-provoking show. Are friends enough, or does everybody need a partner? Is anybody better off alone? How do you get beyond being "Sorry/Grateful"? Karma Ibsen-Riley directs "Company" for the Station, with Debra Dobbs as Musical Director.

"The Last Days of Judas Iscariot" also opens February 2, in the Studio Theatre inside the Krannert Center for the Performing Arts in Urbana. It's a courtroom drama set somewhere in Purgatory, with Judas and his lawyer petitioning for mercy and a ride out of Hell. Read more about this Stephen Adly Guirgis play and the U of I Department of Theatre production here.

"Tartuffe," the Moliere classic that punctures pomposity and religious hypocrisy, will take the stage at Illinois Wesleyan's McPherson Theatre February 14 to 18 at 8 pm and February 19 at 2 pm. Professor of Theatre Arts Nancy Loitz directs "Tartuffe" for IWU. It's a popular choice for college theaters (I think I saw one at ISU just a few years ago, and one at U of I a few years before that) but always good for a laugh, too. Who doesn't like to see a phony baloney religious leader, who pretends to be a paragon of spiritual virtues while he's really filled with lust and greed, brought down? To see that, you can either watch the news or go see "Tartuffe" at IWU.

Heartland Theatre gears up for 2012 with Theresa Rebeck's "Mauritius," which Rebeck has described as a play about, ""Betrayal and treason and poor behavior. A lot of poor behavior.” This little drama involves stamps from the island nation of Mauritius that were printed wrong in 1847. Because of the mistake, the stamps are incredibly valuable, and they may just have shown up in a stamp album left to two sisters when their mother passed away. Which sister really owns the album and the Mauritius stamps? Which of the three men -- a stamp store owner, a wheeler dealer and a greedy collector -- who desperately want the stamps will prevail in the game of cat-and-mouse they all begin to take control? "Mauritius" is directed by Sandi Zielinski and stars Sarah Stone Innerst, Andrew Head, Michael Pullin, Nancy Sultan and Kevin Paul Wickart in the Heartland Theatre production, which opens February 16 and runs through March 4.

Sarah Ruhl has been a hot playwright for a while now, and she's only getting hotter. "Passion Play," a sweeping and yet intimate play about three different incarnations of the traditional Passion Play, one in medieval England, one in Oberammergau, Germany, with Hitler in power, and the last in South Dakota during the Reagan years, comes to ISU's Center for the Performing Arts February 17-25, with a cast that includes Owais Ahmed, Matt Bausone, Caitlin Boho, David Fisch, Frank Huber, Ashlyn Hughes, Keith Jackewicz, Clayton Joyner, Carlos Kmet, Jeff Kurysz and Brody Murray. Click here for my previous piece which includes a more detailed description of the play, or here for ticket information about ISU's production.

If you're trying to catch up with Oscar-nominated movies before February 26, when the Academy Awards show airs on ABC, you have quite a few options. Yes, some of the films have already left theaters, but Comcast On Demand is offering quite a few of them ("Beginners," "Bridesmaids," "The Help," "The Ides of March," "Midnight in Paris, "Moneyball," "The Tree of Life," and "Warrior," at the time I checked.) Otherwise, "Hugo" and "The Girl with the Dragon Tattoo" are playing at the Starplex Normal Stadium," "The Descendants" is still showing in three first-run movie theaters in B-N, "War Horse," "Tinker Tailor Soldier Spy" and "The Artist" are at the Wehrenberg Bloomington Galaxy, and "The Artist" is also on screen at the Art Theater over in Champaign. If you want to see "The Artist" in an older theater that dovetails nicely with the plot of the movie, the Art is your best shot. And if you want to see "Hugo" in an older movie theater that dovetails nicely with the plot, our very own Normal Theater can make your dreams come true. "Hugo" will air on the Normal Theater's wonderful big screen February 23-26.

The Normal Theater is also showcasing Oscar's favorite short films from 2011, with programs of the nominated Documentary Shorts February 14 and 15, Live Action Shorts February 16 and 17, and Animated Shorts on the 18th and 19th. I've seen one of the Animated Shorts, and that one alone was so lovely I think I'm going to have to go see the whole bunch. The one I saw was called "The Fantastic Flying Books of Mr. Morris Lessmore," created by William Joyce and Brandon Oldenburg. If you'd like to know what's nominated in those categories (as well as all the others), you may click here.

And on the local front, the Vale Community Players at Vale Community Church in Bloomington will present "Seasons of Love" February 23 and 24. I don't have a whole lot of info about this production, but it popped up as a Facebook page, so I know they're out there somewhere.
Posted by JulieK at 11:57 AM