"Drowning Ophelia: A New Rock Musical" with a Sneak Peek Just for You

Although I don't think they've officially left ISU yet, JD Cannady, Eliza Morris, Mickey O'Sullivan, Zack Powell, Patrick Boylan and Tommy Malouf are taking their act on the road, with performances of a new rock musical called "Drowning Ophelia" already set for New York. But here's the good news -- the "Drowning Ophelia" troupe is offering a sneak peek for friends and fans here in Bloomington-Normal before they take off for NYC. 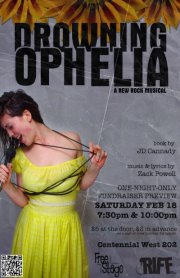 The BloNo preview will play this Saturday, the 18th, with back-to-back performances at 7:30 and 10 pm.

Cannady is directing; he also wrote the book of this musical, with Zack Powell providing music and lyrics. The "Drowning Ophelia" info tells us this is about Ophelia (yes, the one from "Hamlet") in purgatory where she's hanging out, waiting for Hamlet. "Using an eclectic mix of rock styles and an onstage band consisting of Shakespeare’s most lovable clowns, Ophelia takes over to raise arms against men... well just one man. In DROWNING OPHELIA, we come to understand one girl with some issues and a microphone and the story of Hamlet told through an exciting theatrical concert of sex, drowning, and rock ‘n’ roll."

If you're in Illinois, these two performances are your only chances to catch Ophelia (who looks like she will be played by Eliza Morris, judging from the poster). If you're in New York, you can pick from six performances taking place at UNDER St. Marks, 94 St. Marks Place, scheduled from Saturday, February 25, at 7 pm, through Sunday, March 4, at 1 pm. In New York, "Drowning Ophelia" plays at a different time every night, so be sure to check all the details here.
Posted by JulieK at 11:11 AM