A few days ago, we heard from Kevin Paul Wickart on the subject of Theresa Rebeck's "Mauritius," opening February 16th at Heartland Theatre. Wickart plays Philip, the owner of a dusty and somewhat forlorn stamp shop. He's one of three men interested in nabbing some valuable stamps -- the Mauritius Post Office stamps -- which were left to a pair (or to one or the other) of half-sisters who don't agree on what to do with the stamps or to whom they actually belong.

Sarah Stone Innerst is playing Jackie, the younger of the two sisters, the one who is at the heart of the stamp conflict in "Mauritius." She's a very intriguing character, so I was most interested in hearing what Sarah had to say about Jackie, as well as about her own acting career, and how she got to be here. 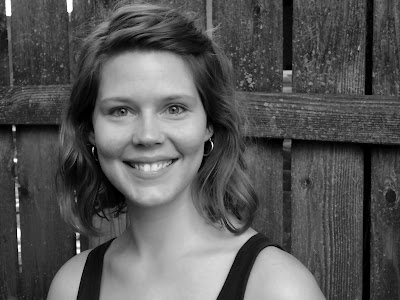 Thanks for letting me ask you all these questions, Sarah! Let’s start with some background info. I believe your husband is Josh Innerst, one of the group of eight actors who are almost finished with their three-year MFA acting program at ISU, which means you probably came to Bloomington-Normal in 2009. Is that right?

Yes, Josh and I came to Bloomington-Normal in June 2009 so he could get his MFA from ISU and learn from its prestigious faculty. We are so happy we came - many of the people we interacted with in these past three years will no doubt be dear friends for years to come.

Where were you before that?

Josh did the internship at the Milwaukee Repertory Theatre during the 2008-2009 season, and we loved our time in Milwaukee! The city has a similar feel to where I grew up in Cleveland, Ohio.

I’m guessing your husband has plans to be a professional actor, given the program he’s in. What about you? Is your academic background in theater, too?

Now that Josh is wrapping up his education, it's my turn! I am auditioning for grad schools across the nation in hopes of finding the right MFA Acting program for me. My academic background is not in theatre - I have a B.S. in Family and Consumer Sciences and a B.A. in Humanities - but I did get involved in theatre in college since my minor was Speech. That's where Josh and I met: we were in a production of Agatha Christie's And Then There Were None together.

I know from Kevin Wickart’s interview last week that since you’ve been in B-N, you’ve done “The Pajama Game” at Community Players. And I know from being in the audience that you were in one of last summer’s 10-minute plays at Heartland Theatre, plus you were part of the ISU/Heartland collaboration on Chekhov’s “Three Sisters,” also directed by Sandi Zielinski, who is directing “Mauritius.” Did I miss any of your B-N credits?

I also did The Diviners with Michael Pullin at Heartland last fall. I loved working with both Kevin and Michael, and I was thrilled when I found out we were all cast in Mauritius!

I can't believe I forgot "The Diviners." Good work there, too!

All in all, “The Pajama Game” is very different from “Colored Entrance Around Back,” a short play reminiscent of “The Help,” and “Three Sisters,” with its heavy emotional drama, as well as "The Diviners," which also gets pretty dark as it examines faith and consequences in a small town during the Depression. Which do you prefer, the lighter fare or the more dramatic?

Oh, that's a hard question - that's like asking if I prefer milkshakes or ice cream! I love both comedy and drama in different ways. Comedy is great because I love a fast-paced story that tells the truth in a witty way. Drama is fulfilling because it slows life down and allows you to tell a complex story with complex characters. Both genres have the core of truth, and both genres allow the audience to laugh at some point. I love that both comedy and drama can be funny.

Where did you get your start on stage?

My elementary school's production of Raise the Flag was my first stage experience; I was in first grade, and I played Daughter #2 in a very cute Pilgrim outfit that my mother made. My first speaking role was in fourth grade as Sissy Seagull in Patch the Pirate Goes to the Jungle. My cousin was also in that play, and I remember being loathe to put my head on his shoulder when the script demanded it. I like to think I've grown in my art since then.

You started young, so there was plenty of time to grow! Do you have a favorite role you’ve played over the years since Sissy Seagull?

My favorite role so far has been Doris in last summer's 10-Minute Play Colored Entrance Around Back at Heartland Theatre. I got to know the character very well, and the experience all around was delightful.

Glad to hear it. I love the 10-Minute Play Festival, too. How about something you would love to play if given the chance?

Anna from The King and I! That's the role I was born to play. I would also like to tackle Portia from Merchant of Venice; I love her intelligence and integrity.

I can see some similarities between Anna and Portia, I think. Including intelligence and integrity. There's also a certain persistence and ingenuity in both of them. Interesting. So how does “Mauritius,” with its slightly sinister story of siblings who don’t get along and nefarious stamp collectors with ulterior motives, fit into the overall picture of your acting career? Have you played someone like Jackie before?

I have a pretty broad spectrum of characters on my acting resume, but most of them tend to be fairly matronly and have their act together. I have never played anyone like Jackie before - Director Sandi Zielinski was very gracious to give me this opportunity to grow in my art! I am so grateful to be working with her; she is a great teacher, and I feel very safe creating something onstage knowing she will tell me if it works or not. 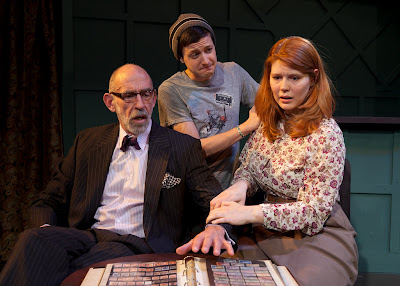 From left, Michael Pullin, Andrew Head and Sarah Stone Innerst
as they appear in "Mauritius" for Heartland Theatre.
Photo credit: Jesse Folks
I think, for me, Jackie is probably the most interesting character in “Mauritius,” since it seems obvious that there is a lot out there that this girl wants, even if she isn’t clear on how to get it. I’d say there’s quite a bit under the surface with Jackie. How would you describe her?

Oh, Jackie is a spitfire! She is a damaged girl who has missed out on a lot in life - and now she wants to create a new one. Theresa Rebeck, author of Mauritius, has done most of the character work for me; she is a brilliant author. It is hard for me to understand Jackie's feelings of betrayal, loneliness, emptiness, desperation, and anger. I have experienced these only on a small scale, so I observed people I love who have known these trials first-hand. Observation plus imagination plus empathy is what you will see onstage at Mauritius. I hope it translates into truth.

What are you enjoying most about this “Mauritius” experience?

I have loved the stage combat! I've done some dancing onstage, but this is the first time I have done any fighting.

Kevin said the same thing about the stage fighting. Sounds like a feisty cast! What would you say is the biggest challenge for you so far?

The biggest challenge I have encountered is probably the text memorization - Jackie's speech pattern is very colloquial: "I didn't, um, okay. Can you just - yeah. I don't, um. I'm not. Just get out of here." And our stage manager Melissa Mullen is a stickler about getting lines word-perfect! (Just as she should be!)

When I'm not on stage, I am either at work or getting inspired by nature, books, or art. I work at the Bloomington Public Library during the day! I am the Support Services Manager: I am in charge of Building Maintenance & Operations and Custodial & Security Staff, and I act as a liaison between the library and its various boards. I really enjoy being at the library - as someone who grew up using the library, I understand and appreciate its importance in the community.

Do you have plans for where you’ll be heading after May?

Josh will be working at the Utah Shakespeare Festival this summer, and I will wrap things up here and join him later in the summer. If I go to grad school in the fall, that city will become our home base, and Josh will travel as necessary from there. Both of us would prefer to work in regional theatres across the country, but it's quite possible that we will end up in New York City at some point in the near future.

Thanks so much, Sarah! I hope to keep seeing you on area stages while we still have the chance. And best of luck with those grad school applications!
Posted by JulieK at 12:14 PM