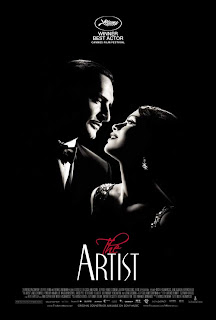 "The Artist," like "Hugo," takes a look at the history of the movies, asking today's moviegoers, bred on boy wizards, vampire love, battles of large blue aliens, gunfire, crashes, smashes and spectacular explosions, to experience a kind of film that is long gone. In "The Artist," it's the silent film. And what sets "The Artist" apart, what made it such a favorite in Cannes, where it premiered, is that director Michel Hazanavicius really did create a silent film. Yes, it's an homage, but not just an homage to silent films. Not a send-up ("Silent Movie"). Not a singing ("Singing in the Rain") or talking ("Sunset Boulevard") movie about how the talkies treated silent film stars.

Nope. "The Artist" really is (with a few tiny exceptions that only add to its charm) a silent film, with actors who emote with their faces instead of their voices, accompanied by the occasional dialogue card. That may be hard for today's audiences to get into, and it's tough for a movie like this to play at the multiplex alongside shouty, noisy action pictures with explosions and gunfire every two seconds. That's probably why it hasn't and probably never will be a box office bonanza.

But the way the story in "The Artist" is told is perfect for its subject matter. And it's fun and sweet and effervescent enough to be completely entertaining and kind of adorable if you're the kind of viewer who can leap over the silent threshold and give it a chance.

"The Artist" centers on a dashing silent film star, one George Valentin, winningly played by French actor Jean Dujardin as a Douglas Fairbanks style adventure hero with a John Gilbert twist. Valentin has the world at his feet as long as the movies stay silent. At a premiere, he meets a fizzy young thing named Peppy Miller (played by Bérénice Bejo) who wants to make it in the movies, and he gives her a helping hand. But then the movies start to talk, which doesn't interest George in the least. Peppy and her flapper persona are perfect for talking pictures. But George is not. As her fortunes soar, his take a major dive.

It's the old "A Star Is Born" trajectory, told with impeccable style and a wonderful cast of character actors, from James Cromwell as Valentin's faithful chauffeur to John Goodman as a bombastic studio chief, Beth Grant and Ed Lauter as Peppy's household staff, and Joel Murray as a friendly policeman. I wasn't as fond of Penelope Ann Miller, all platinum hair and sour facial expressions, as George's unhappy wife. She seemed much too old to be a suitable candidate for Dujardin's matinee idol to be married to. Sure, Clark Gable came to Hollywood with a much-older wife, but he didn't keep her once his screen persona was established. It just seems odd for toast-of-the-town George not to have acquired a young, beautiful wife to splash all over the movie mags, especially since this one clearly hates him. (The fact that she spends her time drawing mustaches and devil horns on all of his pictures in those movie mags is a nice touch, however.)

I also wondered if there was a Penelope Miller/Peppy Miller connection. Coincidence? If not, what does it mean? Penelope Ann Miller was never that peppy, was she? 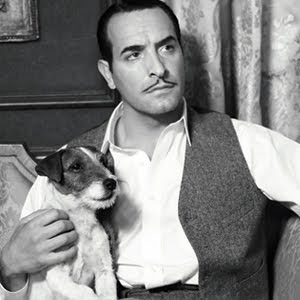 The other supporting actor who really makes an impact is Uggie, the bouncy terrier who plays George's frequent co-star and real-life best pal. Uggie is irresistible and cute as a button throughout. I have to think the success of the movie is about 40% Uggie, with Jean Dujardin a solid 50%.

That's not to say that director/screenwriter Hazanavicius didn't do a bang-up job. He did. Everything is stylish and joyful and very, very nicely accomplished. Hazanavicius's love of old movies and silent film stars is apparent, and he definitely gives them their due. But I still think the infectious charm in Dujardin's performance (and in Uggie's) raises "The Artist" to a different level. It makes it seem like a bigger movie than it really is.

It's fine by me that it's not an Oscar-style epic, by the way. My taste tends to run to exactly this kind of small, sweet movie. I'm a little surprised it's getting so many awards tossed at it, though. What's great about "The Artist" is that it does its job perfectly, that it hits the target it aims at, and it does it all without hitting you over the head or shouting at you with its message.

I still think "Hugo" is the best movie of the year. That doesn't stop me from having an affair with "The Artist" on the side, however.
Posted by JulieK at 1:51 PM