Just in Time for Oscar: "Hugo" at the Normal Theater 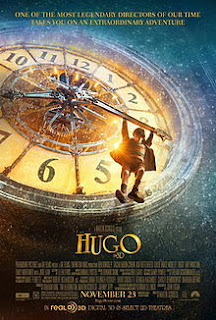 As Oscar night approaches (it's Sunday, the 26th, with red carpet coverage starting at 6 pm Central time and the awards themselves taking a bow at 7:30), the Normal Theater is bringing us four nights of "Hugo," the magical movie that leads the Academy Awards pack with 11 nominations.

Go see it. You need to see "Hugo." In fact, I wouldn't think there was anything wrong if you wanted to sit in a nice, comfy seat at the Normal Theater for all four shows. Well, maybe not Sunday night, since that's the Oscar ceremony. Or maybe you'd rather watch "Hugo" one more time instead of the Oscars. I can understand that.

The Normal Theater has also kindly provided a link to the trailer for "Hugo" here. Lovely.

Given the fact that it's earned 11 Academy Award nominations, you might think "Hugo" is fated to walk away with a passel of Oscar statuettes on Sunday. Alas, "The Artist" has been dominating everybody's awards, and it seems likely to win Best Picture as well as Best Director, even though "Hugo" and director Martin Scorsese deserve both, in my opinion.

"Hugo" is an amazing achievement that should speak to anybody who's ever loved being swept away by history or movies or books. Scorsese did a beautiful job making use of film technology -- specifically 3D -- to illuminate and elevate film pioneers and their fantastical creations, as well as create a whole world within one train station in Paris in the 30s. I don't know whether the Normal Theater is showing the 3D version of "Hugo" (their website says nothing about 3D, which means probably not) but I hope so. I am not, in general, a fan of 3D. It seems to distance me from the characters and the reality of their situation, as well as give me a headache. But in "Hugo," it's used so lovingly, so perfectly, it pulls you in rather than pushing you away (or blasting at your head). As a result, it adds to the complete magical experience.

Oddly enough, both "Hugo" and "The Artist" are about film history. The fact that they've appeared in the same year gives the Academy plenty of opportunity to celebrate movies and splash around lots of footage from the films of Georges Méliès, representing "Hugo," as well as Buster Keaton and Charlie Chaplin, and maybe even a little Douglas Fairbanks, as homage to "The Artist," during Sunday's ceremonies.

I love movie history, including the way-back history of the Oscars (first awards handed out in 1929, with "Wings," Emil Jannings and Janey Gaynor the big winners) and I hope they do, indeed, surround the ceremony with clips of fabulous films, fabulous actors and actresses, and lots and lots of movie treasures.

"Hugo" plays at the Normal Theater tonight, Friday, Saturday and Sunday, with all shows at 7 pm.