An Early Look at "Passion Play," Upcoming at ISU's CPA 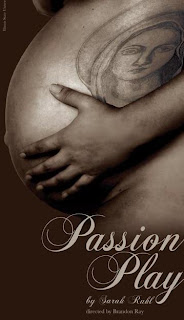 I like Sarah Ruhl's writing in general. She's a little weird and a little wacky, but she manages to bring together disparate elements like love, romance, belief, fate, and yes, passion in a very creative package. The ideas are practically bouncing off the walls in her plays.

"Passion Play" is one of her best, if also one of the most dense and complicated. There is a lot going on here, both in terms of characters and the magical, sad, funny, strange world around them. And director Brandon Ray is doing his best to mine those depths and bring all the magic to the stage at ISU's Center for the Performing Arts beginning Friday.

The "passion" in this "Passion Play" is about the life (and specifically, the suffering) of Jesus, referring to the Passion Plays that have been happening since the 15th century, when regular old folks (not actors, in other words, but carpenters and fishermen and girls next door) put on dramatic presentations to tell the story of Jesus's trial, crucifixion and resurrection.

“I’ve been obsessed with the Passion play since I was a child,” Ms. Ruhl told the New York Times. “Maybe it was being raised a Catholic, but I was definitely also interested in how whole towns would get involved, or religiosity could be used as a cloak for other things. In that sense my play is much more about theater than it is about religion.”

Ruhl takes her "Passion Play" narrative across about four hundred years, showing us how they put on the play in an English village in 1575, with a visit from Queen Elizabeth; in Oberammergau Germany in 1934 with Hitler on the rise; and finally in a backwater town called Spearfish, South Dakota during Viet Nam and then the Reagan years. The script specifies that the same actors will play different characters in those three eras, but continue to play the same roles in the play-within-the-play. If that sounds complicated, it doesn't come off that way in the script. For example, for ISU, actor Matt Bausone plays a misshapen, smelly fish-gutter named Pontius in Elizabethan England. Pontius is set to play Pontius Pilate (obviously) and Satan in the play, and he is jealous of his handsome, pious cousin John, played by Jeff Kurysz, who will take the role of Jesus, as his father did before him. In the next section, set in Germany in 1934, Bausone plays a foot soldier in Hitler's army, one who is suppressing his feelings for Eric, another handsome man cast as Christ in the pageant, again played by Kurysz. And in the third act, with Kurycz as J, yet again set to play Christ, Bausone's character is P, a tortured Viet Nam vet who is having trouble keeping himself together long enough to make it to the play. Bausone plays three different characters -- fish-gutter, soldier, vet -- in the three different eras, but they're all cast as Pontius Pilate in their respective Passion Plays.


Ruhl's soaring imagination and sharp sense of humor are on display throughout "Passion Play," and Ray's scenic designer, John Stark, is clearly matching that quirky mood, as you can see from the "paint day" pictures, with a crew member taking a break on the beautiful painted backdrop (below), and a view of the cross as it was being built (above) that plays such an important role in the Passion Plays within this "Passion Play."

You should be aware, however, that you will not see an actual Passion Play in any of the three eras. All three sets of would-be actors and stage crews struggle to find a way to overlook or even improve on their own human frailties in order to tell this story that is so important to them. And they pretty much screw it up every time.

"Passion Play" is not a short play, and you can expect performances at the Center for the Performing Arts to take in excess of three hours, with two short intermissions. Sometimes a story is too big for the current 100-minutes-with-no-intermission model. "Passion Play" is one of those plays. Its theatrical scale and thematic scope require no less.

The play opens on Friday, February 17th, with a 7 pm performance. Subsequent performances are scheduled for February 18 and 19 and 22, 23, 24 and 25. For all the details or to order tickets, click here or here.
Posted by JulieK at 2:46 PM