Tension and intensity are the keys to Theresa Rebeck's "Mauritius" as it uncoils on stage at Heartland Theatre. There's tension among all the actors and the characters they play, as they circle hungrily, not unlike a pack of wolves, around a potentially valuable stamp collection. Director Sandra Zielinski adds intensity to the mix with her staging, ramping up into physical violence as her characters shove each other aside on their way to the prize. 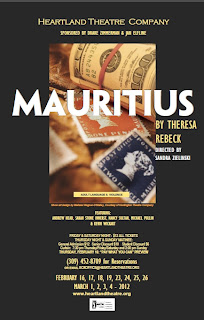 Two half-sisters, Mary and Jackie, have been left behind after the recent death of their mother. Mom also left behind a stamp collection, which both half-sisters profess to own. Mary, the older daughter, argues that the stamps were the prized possession of her grandfather (a grandfather she did not share with Jackie) and that they are therefore of sentimental value to her and her alone. But Jackie was the one who stayed at home with her mother through what sounds like years of financial distress and emotional abuse, and she is desperate to sell the stamp collection to provide the funds for a new life far away from her mother's house of pain.

Neither consults a lawyer. That's understandable, since most of Rebeck's conflict would fly out the window if they did. Probably better to just call that poetic license and move on. Oh well.

Instead, Jackie takes the stamp collection to a less-than-posh stamp shop, owned by the cranky, uncooperative Phillip, to try to figure out what it's worth. Phillip isn't in the mood to rouse himself to look over her stamps or offer an opinion on their value, but Dennis, a cagey younger guy always looking out for just this kind of score, is willing to jump in. He notices immediately that there are some very rare, very valuable stamps in the album she's toting.

And that's when things start to get good. Are the stamps real? If they are, who owns them? What will Jackie and Mary do to each other in order two keep their hands on them? And who among the trio of pursuers -- slick, charming Dennis, worn-out Phillip or greedy, menacing collector Sterling -- will bend the others to his will?

Rebeck's script is all about cross and doublecross, smackdown and backhand, with clever dialogue that comes out in naturalistic bits and pieces, as well as a fair share of swearing, shouting and swagger. In the intimate confines of Heartland Theatre, the violence -- both verbal and physical -- is in-your-face and scary, with edge-of-your-seat suspense. The actors work quite well together, which is absolutely necessary when they're choreographing this much action in such a small space.

Sarah Stone Innerst leads the cast as Jackie, who comes off stubborn, hard and just unhinged enough to do some serious damage as she faces off against the world. As her sparring partner, older sis Mary, Kate McDermott-Swanson is flinty and snooty, a real piece of work, the one who had all the advantages but still doesn't feel like she needs to share.

The three men are different enough, and yet each threatening in his own way. Kevin Paul Wickart is world-weary and hang-dog as Phil the Philatelist, brooding in the background and nursing his hurts like a perennially sore tooth, while Michael Pullin's Sterling is really, really scary. Pullin's physical presence is menacing from the first moment he appears in a long, plush coat, swirling it like his super-villain cape, casting a dark shadow over everybody else.

Andrew Head finishes out the trio, playing Dennis as a smooth wheeler dealer who thinks if he throws out words fast enough, nobody will noticed they're being conned. Head's Dennis is less the self-assured seducer of the off-Broadway production and more a boyish overachiever, an Artful Dodger, a whiz kid. It works just fine, as Dennis becomes the irresistible force opposite Jackie's immoveable object, and Head and Innerst strike up a nice chemistry.

Scenic Designer Michael Pullin, who also plays Sterling, contributes a snazzy set, which I am told offers a gray-green back wall with inset squares to reference the color of money and the shape of stamps. Nicely done.

"Mauritius" continues with performances through March 4, with a panel discussion after the matinee this Sunday, February 26th.

Running time: 2:10, including one 10-minute intermission
Posted by JulieK at 2:05 PM