A SHAYNA MAIDEL Soars at IWU 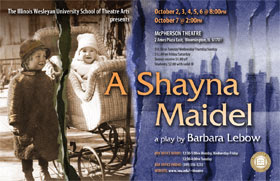 Barbara Lebow's A Shayna Maidel is a perfect example of how to explore an issue, something really weighty and important, through theatre. As she builds her drama around a family split by the Holocaust, Lebow keeps the focus on her characters, on how these specific people have been divided and damaged and changed forever. That effort makes the issues -- family, faith, loss -- achingly real and heartbreakingly human.

A Shayna Maidel centers on sisters Rose and Lusia, one brought up in America and one left behind in war-torn Poland, reunited for the first time since Rose was four. What should be a miracle, what is a miracle, doesn't come easily, as Rose and Lusia struggle to find common ground, to remember and to forget, and to figure out what family means there's nothing familiar there.

This is not an easy show for college-age actors, since it requires a great deal of maturity, especially from the actors playing Lusia, so fragile and so fierce, and her father Mordecai, who bears his own scars. Nancy B. Loitz, who directs A Shayna Maidel for Illinois Wesleyan University's School of Theatre Arts, draws excellent performances from Amy Stockhaus, who finds the emotional truth in Lusia, and Ian Scarlato, the rare 20-something who can credibly play a 70-year-old. I don't know how Scarlato manages it, honestly. But Mordecai's prickly pride, terrible regrets and inability to bend are clearly etched in Scarlato's performance.

Annie Simpson is very pretty, a "shayna maidel," indeed, as Rose, while Sarah Menke is a joy as Hana, the friend Lusia left behind, Allyce Torres is a warm presence as Mama, and Ben Mulgrew does beautifully with both sides -- the sweet youth of memory and the drawn, pale face of reality -- of Duvid, another broken piece of Lusia's heart.

Scenic Designer Curtis C. Trout mounts the action on three levels of golden wood in the cozy domesticity of Rose's New York apartment. It's a beautiful set with a clever little radio that lights up (and cues some nostalgic mood music, too.)

Zachery Wagner's costumes do a nice job of evoking the 40s, with pretty frocks and robes for Rose, a solemn suit for Mordecai, and a dreary sweater and skirt for poor Lusia. Who's who and where their heads are becomes clear just from the wardrobe.

This is not a short play -- it ran about 2:40 on the night I saw it -- and it takes a while to find its rhythm, with a costume change or two that trips up the pace in the early going. Act II goes much more smoothly, however, as emotion flows more freely and secrets are unlocked, building to a moving conclusion.

A SHAYNA MAIDEL
By Barbara Lebow

Remaining Performances: October 5 and 6 at 8 pm and October 7 at 2 pm.

Running Time: 2:40, including one 10-minute intermission