Don't Forget THE MEMORY OF WATER Opens at IWU on Thursday 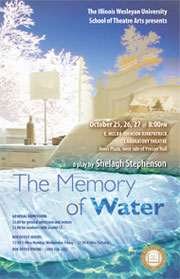 What is about drama and three sisters? I know I've talked about this phenomenon before, about Three Sisters and King Lear and Crimes of the Heart... And Shelagh Stephenson's The Memory of Water, which opens Thursday night at Illinois Wesleyan's Melba J. Kirkpatrick Laboratory Theatre.

This one is about three British sisters, gathered together for their mother's funeral. Each has distinctly different memories of their mother and of events from their childhood.

They may've shared a mom and a lot of time growing up, but they certainly don't share the same memories of them. Since Vi, their mother, suffered from Alzheimer's Disease, the issue of memory is very important in the play.

The sisters are Teresa, the oldest, who runs a health food store with her husband; Mary, in the middle, who's had a five-year affair with a married man; and Catherine, the youngest, who is needy and naive and resents feeling outside the family circle all the time. Each has her challenges and disappointments, making them more alike than they may think.

Performances of The Memory of Water are scheduled for Thursday, Friday and Saturday, October 25-27, at 8 pm. Tickets are available at the McPherson box office or by calling 309-556-3232.
Posted by JulieK at 2:23 PM