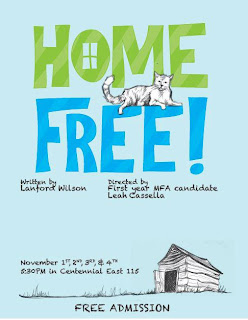 Lanford Wilson is a playwright who fascinates me. I love Talley's Folly, the play that won him a Pulitzer Prize. I also quite enjoy Fifth of July, which has characters connected to Talley's Folly but a slightly different tone. The Rimers of Eldritch is wonderful. And has a different tone from anything so far. Hot L Baltimore is fine, if not a favorite, but once again, whole different tone. I haven't seen Balm in Gilead, although I've heard great things. And then there's Burn This, which I am not a fan of at all. If nobody had attached Lanford Wilson's name to Burn This, I would've sworn it belonged to a different playwright.

But there are similarities swirling around in all of Wilson's plays, about freedom and lack of it, about what it is to be an outsider, about trying to find someone who will understand, and about the fragmentation, the desperation and the poetry in everyday life. In some ways, he is the quintessential Off-Off-Broadway playwright, associated with the emergence of Caffe Cino and La MaMa, even though he made it past Off-Off to Off and then On Broadway with great success.

And all of that serves as an introduction of sorts to Home Free!, one of Wilson's first plays, a one-act about a brother and sister -- at least we think they're brother and sister -- named Lawrence and Joanna. They live together in a place that looks more like a playroom than a house, and they are surrounded by toys and games. The kicker here is that Lawrence won't leave. Ever. And they have imaginary friends. At least we think they're imaginary. We also think that Joanna may be pregnant with Lawrence's baby, and that his inability to leave their playhouse may result in her death. Unless she's not really having a baby. The big question here is whether either can make it out of their little nest alive, or whether they are only free when they are safe at home.

Leah Cassella, one of the first-year MFA directing candidates at Illinois State University, is at the helm of the production of Home Free! that opens tomorrow, November 1, in Centennial East 115 on the ISU campus, with actors Patrick Riley and Claire Ford portraying Lawrence and Joanna.

This production is offered free of charge, with performances scheduled at 5:30 pm on November 1, 2, 3 and 4. Since it's free and only 35 minutes long, it's a good chance to see a piece of Lanford Wilson's early work and maybe, just maybe, get a better handle on this unpredictable, deeply interesting playwright.
Posted by JulieK at 4:12 PM