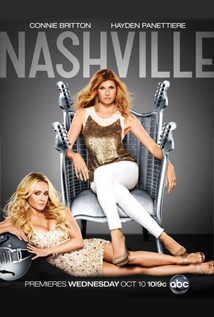 ABC's Nashville, a soaper that spins an All About Eve plot with a country twang, has enjoyed some of the buzziest buzz of the fall TV season. As the newnownext blog put it: Critics really, really love Nashville.

It's got stars with major TV Q in Connie Britton (Friday Night Lights, American Horror Story), Hayden Panettiere (Heroes), Jonathan Jackson (General Hospital), and Eric Close (Without a Trace). Oh, and Powers Boothe, the guy who creeped out a nation when he played Jim Jones in the TV movie about the Jonestown massacre. He's still creepy, but now he's doing more of the classic Big Bad Manipulative Mogul, the kind of role Edward Arnold played in Meet John Doe.

The canny thing about Nashville is that it isn't just relying on star power or the-brash-youngster-toppling-the-veteran-performer storyline, as fun as that story is when Connie Britton is playing Rayna, the established star. But Nashville is borrowing from the Glee playbook by sending the music on the show straight to iTunes. And that music is pretty cool, too.

It ought to be, with the legendary T-Bone Burnett supervising the music. Burnett's wife, Callie Khouri, is the executive producer and writer of the show; she broke out of the pack as a writer with Thelma & Louise back in 1991. Even if the premise of the show is a little hackneyed, even if Hayden Panettiere is playing Juliet, the sleazy newcomer, with all the subtlety of Homer Simpson's makeup gun, Khouri's feel for character and Burnett's music contributions make the show work like a charm.

Jonathan Jackson and Eric Close seemed pretty much wasted in the pilot, but it was nice to see Charles Esten (formerly known as Chip Esten when he was on Whose Line Is It, Anyway?) step into a larger, meatier role than usual, and he sounded great on "Back Home." Musically, both Britton and Panettiere did fine as country singers, too. Not sure how much autotune or dubbing went on with either of them, but they were both as credible as they needed to be.

But it was the newbies -- Brit Sam Palladio and Australia's Clare Bowen playing native Nashville types trying to break into the biz -- who made the best impression, with a cover of the Civil Wars' "If I Didn't Know Better" that came off soulful and hypnotic, haunting and seductive. I loved it. I may buy it from iTunes. Or I may get it the original Civil Wars, instead. But Palladio and Bowen are appealing as actors, too, with a definite Once feel to their characters and their song that provides a nice contrast to some of the other, cheesier plot devices. You know, like the hinted-at "Who's the Daddy?" subplot and the political intrigue and Juliet's mama drama. Not to mention Juliet sleeping her way through Rayna's men, just to twist the knife.

All of that provides the soap. But it's the music that will keep me tuning in.

Nashville airs on ABC on Wednesdays at 9 Central.
Posted by JulieK at 9:48 PM