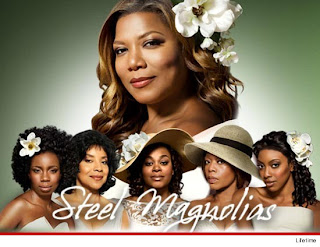 Steel Magnolias is not just a 1989 movie starring Sally Field, Dolly Parton and Julia Roberts, not just the Lifetime movie that airs tonight at 8 pm Central Time, starring Queen Latifah, Alfre Woodard and Phylicia Rashad. It's also a play. A very popular play, by a man named Robert Harling, who, as far as I know, has only written the one play, although he's done several screenplays, like Soapdish and The First Wives Club.

But it's Steel Magnolias that is Harling's calling card. The play is set entirely in a Louisiana beauty shop, a place where a bunch of ladies hang out all the time, shooting the breeze over shampoo and perms as well as life and love and friendship. The small-town setting and all-female cast makes it perfect for a whole lot of small-town and medium-town theatres, the kinds of places where they recognize these women and their beauty salon. So, no, Steel Magnolias doesn't get staged at the Goodmans and the Guthries and the Mark Taper Forums of the world, but in places like Bloomington, Monticello and Champaign instead.

It's not my favorite play, I have to admit, although it's always fun seeing how they manage enough plumbing to make a working hair salon on stage. But the situations are a little too sentimental for me, and the dialogue... Suffice it to say I'm not really into "I'd rather have thirty minutes of wonderful than a lifetime of nothing special," offered as a rule to live (or, actually, die) by. I'll just quote a more acerbic character in a different play and say, "Well, that's a stupid thing to do."

Still, Steel Magnolias has its fans, and the Lifetime movie has a talented cast who may just be able to pull the material out of its soggy moorings and give it some life. Queen Latifah is billed as the star, as you can see in the poster image at the top, and she's playing M'Lynn, the mom character Sally Field took on in the 1989 version. I can't imagine Queen Latifah going the trembling-chin, misty-eyed martyr route. Let's hope she gives M'Lynn some fire.

Alfre Woodard is always magic, and she's taking on Ouiser, the cranky one in the bunch who has all the best material, played by Shirley MacLaine in 89. Dolly Parton, another one who manages to make magic with inferior material, was Truvy, who runs the beauty salon, in the big-screen adaptation; that role is now played by singer-songwriter Jill Scott. Lifetime's cast also includes real mother and daughter Phylicia and Condola Rashad, even though they're not playing mother and daughter here. Instead, Phylicia is cheery Clairee, Ouiser's nemesis, and Condola is Shelby, M'Lynn's daughter, the self-sacrificing lamb who gets that terrible "thirty minutes of wonderful" line. Julia Roberts got an Oscar nomination for playing Shelby, and Condola may score an Emmy nod if she plays her cards right. The cast is rounded out by Adepero Oduye as clueless Annelle, taken under Truvy's wing to get her life straightened out.

So there you have it. If Steel Magnolias is your thing, you'll definitely want to try the one on Lifetime tonight at 8. Given the cast (seriously, Alfre Woodard is as good as it gets), it looks to be the best of all possible Steel Magnolias. You can see photos and video, including a preview, on Lifetime's site for the movie.
Posted by JulieK at 12:01 PM