You might've thought NBC had high hopes for "Animal Practice," a sitcom that premiered in August and got a primo slot during the Olympic closing ceremonies. Yes, you read that right. It wasn't broadcast after the big Olympic blowout. It was during. 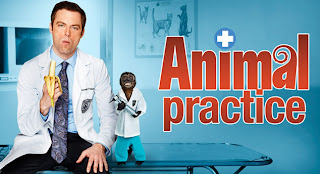 That raised a few eyebrows at the time, and it doesn't seem to have endeared anybody to "Animal Practice," which is the first sitcom of the new season to get the hook. (The CBS drama "Made in Jersey" was the first show overall to get a pink slip from the Fall '12 class.)

"Animal Practice" was billed as a sort of "House" with animals, as cranky vet George Coleman, played by Justin Kirk, preferred the company of his furry and feathered patients to people. His assistant, seen in the image above, was a Capuchin monkey.

If that sounds silly to you, it sounded wrong wrong wrong to animal welfare organizations like PETA and Animal Defenders, who'd protested the treatment of that monkey by NBC.

It's doubtful NBC was concerned by any of those protests, although they had to be concerned by its anemic ratings. Last Wednesday's episode eked out 3.8 million viewers and a 1.0 share of the audience between 18 and 49. That's down more than 9% from the previous week in that demographic.

Moral of the story? Don't interrupt Olympic Ceremonies, opening or closing, and don't try to launch mediocre product in high-profile slots. Oh, and don't mess with monkeys.
Posted by JulieK at 2:08 PM