Wondering What's Coming Up From Illinois Shakes Fest in Summer 2013? 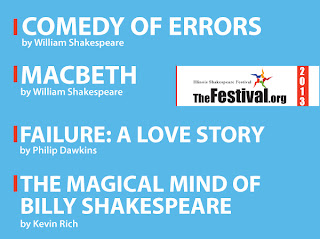 Tonight was the night the Illinois Shakespeare Festival brought out the big red bus and gave us the news about what will be on stage when summer 2013 rolls around.

Back in September, I guessed Comedy of Errors, Hamlet and She Stoops to Conquer for the main season, and didn't hazard a choice for the Theatre for Young Audiences slot. This evening, at a special press conference held at Ewing Manor, the ISF and new artistic director Kevin Rich announced that the three mainstage plays will be Comedy of Errors, Macbeth and Failure: A Love Story, a "magical, musical fable" by Chicago playwright Philip Dawkins. The Theatre for Young Audiences choice is The Magical Mind of Billy Shakespeare, written by Rich himself.

But, after all, the play's the thing. Or the plays are the thing. And in terms of plays, we'll be getting funny, silly, nothing-serious-about-it Comedy of Errors, the one with the identical twins separated at birth, wandering around not realizing everybody in town is mistaking one for the other, as well as Macbeth, Shakespeare's dark and scary journey into murder, madness, and ambition run wild.

You may remember Philip Dawkins as one of the authors invited down to Bloomington for a staged reading last summer as part of the "Midwestern Voices" Playwrights Festival. For that reading, Dawkins brought along Miss Marx, a new play about the daughter of Karl Marx. He is a resident playwright at Chicago’s Victory Gardens Theatre and the author of "The Homosexuals," presented by About Face Theatre at Victory Gardens last year in a very well-received production. The Chicago Tribune's Chris Jones called the play, "ambitious, substantial and deeply impressive." "Failure: A Love Story," the one we'll see next summer, takes the stage at Victory Gardens beginning November 16.

The play is about the lives of the three Fail sisters (if there are sisters in theatre, they usually comes in threes*), siblings who have lived their lives in a "rickety two-story building by the Chicago River that was the Fail family home and clock shop."

Because the Shakes Fest has traditionally focused on Shakespeare or plays that dovetail nicely with Shakespeare, Failure is a departure from the usual fare. I'm looking forward to hearing why Rich chose this piece and seeing how it works with Comedy of Errors and Macbeth. The play itself sounds pretty cool. I'm a big fan of new work, so the idea that our Shakes Fest is adding a contemporary play is good news, I think. And the fact that it centers on three women, to balance out the heavily male Shakespeare canon, is a bonus.

I believe Rich's Billy Shakespeare is a play he's had success with previously, so it ought to be a good match for Young Audiences and outreach programs, too.

Very intriguing, all around. To keep an eye on what's happening with the Illinois Shakespeare Festival, you can visit their Facebook page here.

* I have this dream to produce King Lear, Three Sisters and Crimes of the Heart in repertory, with the same actresses playing the sisters in all three of them. If Dawkins' play catches my fancy, maybe I will add it to my imaginary repertory!
Posted by JulieK at 8:52 PM