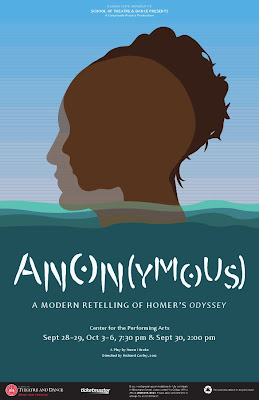 Naomi Iizuka's writing is beautiful. As she uses poetic language and striking images to convey big ideas, she also captures something very human in her work. That's clear in Anon(ymous), now playing in Illinois State University's Center for the Performing Arts in a production directed by MFA directorial candidate Richard Corley.

The human element is provided not only by Iizuka's main character, the boy called Anonymous, here portrayed with heart and weary vulnerability by Owais Ahmed, but in the other voices and faces who step forward to remind us that America's melting pot is composed of individuals, of people who remember beautiful and wonderful things about their homelands, people who lose their souls if they melt into nameless, faceless, interchangeable parts of the American landscape.

The words and the images of this ISU production underline that message, that it's just fine to celebrate what makes you different as well as what makes you the same, and Corley's actors, especially Ahmed as Anon, and Caitlin Boho, Gabriela Fernandez, Martin Hanna, Kent Nusbaum, Omar Shammaa and Taylor Wisham in the ensemble, embrace the material with warmth and commitment to individual characters.

The CPA is a large space for a show like this, but John Stark's set design, with towering panels of sheet metal, provides good atmosphere and tension. There are some striking images here, especially when staging, performances, and scenic and lighting effects all come together, as in the sweatshop scenes with the women in the background moving like automatons, clothing strung over their heads, and when Anon and his friend Pascal take a train ride into the night. The way Corley has staged the end, when Anon finds his version of home, also creates a nice moment.

Mark Spain's costumes and some complicated pieces, like a giant metal bird and a huge butterfly, contribute to the experience, as does Mark Maruschak's atmospheric lighting design.

If I have a complaint, it's that the pace was a bit sluggish on opening night. I clocked Anon(ymous) at 1:15 when I saw it last; this time it was 1:40. Faster playing time and cue pick-ups would've kept the drama clicking along and better involved us in Anon's odyssey across America.