Is NOISES OFF the Funniest Play Ever? Judge for Yourself at ISU's CPA 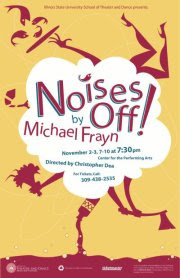 Noises Off, the only play I know that is both an on-stage and off-stage farce, is coming to Illinois State University's Center for the Performing Arts, opening November 2 with a 7:30 pm performance.

I'm not sure -- it's hard to quantify this sort of thing -- but Noises Off may be the funniest play I've ever seen. Because it's about theatre and the crazy interaction between and among theatre people, you may think it's too big an in-joke for the general public. But the first time I saw it, back in the 80s at what was then called the St. Paul Actors Theatre, I went with a bunch of lawyers, and they were all laughing so hard I thought we might need assistance getting out of there.

It's hilarious for the audience, but a pretty tough job for the people that work on it, since the timing of the jokes -- both the physical and verbal hijinks -- has to be perfect, and all the things that go wrong while this hapless company is supposedly performing the farce-within-the-farce, Nothing On, are a sticky wicket to get right. You know the cliche -- dying is easy, but comedy is hard. Noises Off is really, really funny, making it really, really hard.

On the surface, Noises Off is about a British theatre company taking their terrible sex comedy, Nothing On, on the road. The leading lady is Dottie Otley, who once had some fame on TV, but has faded a bit. Her boyfriend, Garry Lejeune, is also in the company, along with Freddie and Belinda, a pair of middle-aged actors, Selsdon Mowbray, an older actor who has seen better days, and Brooke, a blonde bimbo who is only there because she's involved with the director, Lloyd Dallas. The crew off two includes overworked Tim, who hasn't slept in ages and keeps trying to fix things as they go wrong, and Poppy, who is also "dating" Lloyd, creating all kinds of complications as he tries to juggle his various romantic and theatrical obligations. You can see some of the gags in Noises Off represented on ISU's poster, above, with sardines, a fire ax and a series of flowers among them.

The first act shows us a very messy rehearsal of Nothing On, followed by the backstage goings-on during a performance a bit down the road in Act II, and the front of the set again in Act III, after everything has blown up completely.

Michael Frayn's script is genius, no two ways about it. There was a movie version in 1992, but it's not nearly as good, mostly because Noises Off is tied so closely to what you can do on stage.

For ISU, Christopher Dea directs an updated version of the script, with a cast that includes Ashlyn Hughes as Dottie, Kyle McClevey as Lloyd, Nico Tangorra as Garry, Kelsey Bunner as Brooke, Lizzy Haberstroh as Poppy, Matt Hallahan as Freddie, Hannah Brown as Belinda, Nicholas Spindler as Tim, and Joseph Faifer as Selsdon.

Click here for more information on ISU's production of Noises Off including how to get tickets. Performances run November 2-3 and 7-10 at 7:30 pm, with a Sunday matinee on November 4 scheduled for 2 pm.
Posted by JulieK at 10:12 AM