It's the Big Finale Tonight for PROJECT RUNWAY

Project Runway may be Reality TV, but it's still a pretty cool show. Except when the producers (or whoever it is behind that curtain at Lifetime) get unduly involved trying to create drama, it's about talented people with a dream creating art (in this case, fashion art) very quickly, in the hopes they'll make it to the end, where they can maybe maneuver a career out of their appearance on the show and at New York's Fashion Week.

This year hits the middle of that spectrum, with no one really upsetting left, and those who are left all showing a decent sense of self and personal vision. I have to admit, no one's clothes have really wowed me, but I've mostly enjoyed their work.

At this point, we have a Final Four going to Fashion Week. (Really, about ten designers get to show at Fashion Week because of the way the timing of taping works, but they pretend that the ones eliminated by the point the show airs weren't really there at all. It's a silly pretense, since pictures of all the collections -- back so far you won't recall those people even having been on the show -- are on the internet within five minutes of their models hitting the runway.) 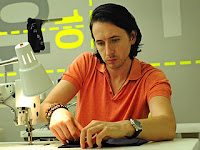 Who's left? In the order of my preference, there's Dmitry Sholokhov, the Russian with the never-ending supply of snarky comments. He's called Snape at Tom and Lorenzo's blog, where people congregate to chat as they watch the episodes, and that is a fairly apt moniker, given his dark and brooding demeanor and the bad hair. He's good at constructing snappy dresses with impeccable lines, but he made a few too many dresses over the course of the season, and the stuff he sent down the runway last episode, as a preview of his collection, was abkhovsolutely awful. He had one great dress, but the jacket with fringe down the sleeves? That thing with a sheer blouse over a black bra top? Uh, no. And those pieces are included in his Fashion Week collection, which left me seriously unimpressed. 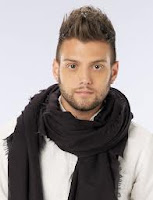 I also like Christopher Palu, who is a cute puppy-dog sort of guy. But he tends to get a little too "Who? Tiny little meeee? Winning again? Well, I never!" and that gets grating after a point. He also seems to be the judges' favorite, the one with all the inexplicable wins, and that also gets wearisome. He's another one who sent total drek down the runway last time out, and his Fashion Week collection is my least favorite of the four. Still, I think, in the end, Christopher will be your winner. Judges Nina Garcia, Heidi Klum and Michael Kors, loooooove him.

I don't really have a favorite between Melissa Fleis, the blonde who says she's goth but really doesn't design all that goth, and Fabio Costa, who himself wears wrapped garments that may be skirts or may not, and showed up with flowers in his hair at least once. (See photo at right.)

Fabio seems like a sweetheart, and I liked his soft and flowy Fashion Week showing better than any of the others, but the judges didn't respond well to the very same garments in the preview, so... Fabio will probably not win.

As for Melissa... Hard to say. I didn't mind her final collection, although it seems pretty simple in terms of silhouettes and pretty hideous in terms of fabric. There's a whole lot of what looks like pleather happening there. And I never did get behind the huge collars she favors.

So there you have it. Dmitry, Christopher, Fabio and Melissa, and one of them will win the title tonight. I'll be away from home during the show, but I'll race home to see what the verdict is. (I will retain a modicum of hope that the judges overlook Dmitry's taste issues, because I really do like him the best. And seriously, none of the four knocked it out of the park collection-wise. Seriously. If they have to pick somebody with a mediocre collection, it may as well be Snape. Er, Dmitry.)
Posted by JulieK at 4:31 PM