Say Hello to HELLO OUT THERE 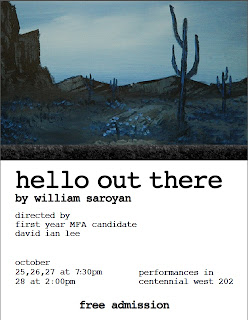 If you know any of William Saroyan's work, it's probably The Time of Your Life, his 1939 play about the patrons of a low-rent San Francisco bar. Hello Out There, a one act Saroyan wrote in 1941, features the same kind of down-on-their-luck folks, with an unlucky gambler and the small-town girl who tries to help him at the center of the story.

Neither of them is given a name in Saroyan's play, but they're both outsiders, loners, in search of something or someone. The Young Man, the gambler, has been arrested for rape on a trumped-up charge in some Nowheresville town. He begins the play by calling out from his jail cell, hoping to reach someone who will listen. The Young Girl answers -- she's working as a cook at the jail -- and when they talk, she discovers she has something in common with the guy in the cell. But as they forge a connection, forces from outside the jail interrupt, shattering any hope the Young Man and Young Girl have of escaping this dead-end end.

David Ian Lee, who is directing Hello Out There in Centennial West 202 for Illinois State University's School of Theatre and Dance, describes the play as "a love story, but not of the romantic sort; it's a story about two lonely people who learn that we -- all of us -- belong to one another."

He continues, "This play exists in a world that can be cruel and unfair, and some inhabiting this world contribute -- by cowardice, by malice, by short-sightedness -- to the darkness. Others see the world as fixed and oppressive, and that it is their role to suffer. This play is about two people who together discover that the world is changeable, but kindness and hope demand active participation: That's how we shape our world."

And that sounds like pure Saroyan, that our hope of moving into a brighter future depends on kindness and positive action.

Lee directs a cast that includes Arif Yampolsky and Audra Ferguson as the two lonely people, the Young Man and Young Girl, along with Antonio Zhurinskias, Chris Bryant, Janice Kulka and David Zallis.

This one-act play last approximately 35 minutes and is presented at Centennial West 202 free of charge, with performances Thursday, Friday and Saturday at 7:30 pm and Sunday at 2 pm. It's a chance to see up-and-coming performers and artists and a little-known, powerful script from a Pulitzer Prize winner. Lee is a first-year MFA directing candidate at ISU and this will be the first chance for local audiences to see what he can do.

And I'll leave you with a link to some mood music, with the wonderful John Prine singing "Hello In There." Yes, it's in, not out, and its characters are old, not young, but it, too, is about loneliness and connections. Plus I love slide guitar, so, you know, any excuse...
Posted by JulieK at 6:48 PM