Fierce and Ferocious: MOTHER COURAGE AND HER CHILDREN at ISU 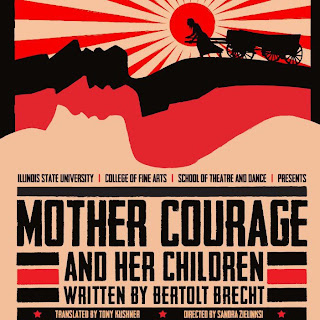 Everybody knows Brecht isn't easy. His plays are uncompromising, political and harsh. The power of Brecht's message makes his work as difficult to watch as it is important.

Mother Courage and Her Children, his 1939 play about a woman who pulls a cart around Europe during the Thirty Years War, selling booze and bread and belt buckles to soldiers of every stripe, was Brecht's reaction to the rise of Hitler and Fascism in his own Europe. The message is clear: War never goes away. War is an economic necessity, dug so deeply into our pockets that we will never be rid of it. And you may think you can build your empire on its pile of corpses, but it will destroy you in the end, the same way it destroys everything else.

Illinois State University's production of Mother Courage, directed with clarity and strength by Sandra Zielinski, broadcasts that message every time Mother Courage's cart is dragged in circles around the stage. The cart moves in an endless cycle. Courage herself, plus her children and anybody who gets pulled into her orbit, are no more than workhorses, beaten down and savaged by the very war they plan to profit from.

It's a natural for playwright Tony Kushner, who is also concerned with Marxism, the economics and politics of culture, and how the proletariat gets stomped, to take on a translation of Mother Courage. Kushner's voice is perfect for the material, with a contemporary sound and forceful language that never strays too far from the heart of Brecht.

Zielinski's staging and stage pictures are sharp and arresting, with Brechtian effects like supertitles framing the action and voiceovers (courtesy an uncredited Patrick O'Gara) offering a cynical commentary. The theatricality of the staging, a folk-music-meets-70s-soft-rock score from recent MFA grad Zack Powell, and ferocious performances, especially from Abby Vombrack as Courage herself and Michelle Stine as her mute daughter, Kattrin, give this Mother Courage a powerful punch.

Vombrack is all fire and muscle, pushing the play along from beginning to end by sheer force of will, while Stine has a haunted quality and an expressive, luminous face that speaks volumes about the horrors of war.

Courage's other children -- Tommy Malouf as the brash, violent Eilif and Alex Kostner as pale, sad Swiss Cheese -- are also good, as are Matthew Scott Campbell as the boisterous Cook, Andrew Rogalny, Jr., as a vacillating Chaplain, David Fisch as a cigar-chomping general, and Hayley Camire, whose camp-following hooker Yvette makes a vivid impression.

Malouf and Kostner join Devon Nimerfroh and Pat Boylan in a quartet of musicians that pops up to accompany the singers and add music at interludes, making Powell's music sound lively and on-target.

Delia and Linnea Kerr-Dennhardt also contribute to the tableau as Children of War; Linnea has a charming bit with an umbrella and both stand on the sidelines, as mute as Kattrin, near the end, to bear witness. It's a telling image, as we see how the violence and bloodshed around them have robbed so many of any voice at all.

And Zielinski's choice of a final freeze, as Mother Courage struggles to hoist her wagon one last time, twists Brecht's knife one last time.

Running time: 3:10, with one 15-minute intermission

For information about the show, click here or here. For ticket info, click here.
Posted by JulieK at 11:09 AM