A Little Bit About Lindsey Gates-Markel and Her Role in OR, 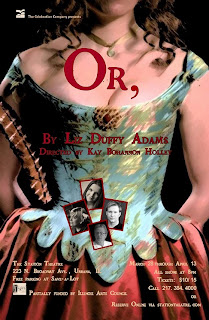 Last week I talked to director Kay Bohannon Holley about her upcoming production of Liz Duffy Adams' breezy, boisterous historical romp Or, which opens on Thursday night at Urbana's Station Theatre. Holley's star, playing the role of Restoration playwright Aphra Behn, is Lindsey Gates-Markel, who has taken on some very different roles during her time with the Celebration Company. Gates-Markel has been Eurydice in Sarah Ruhl's play of the same name, Suzanna, the quirky newlywed who has a dangerously close connection to her adoptive brotherin Gina Gionfriddo's Becky Shaw, and most recently, Hamlet. Yep. Hamlet. That's Lindsey as Hamlet on the Station Theatre's poster for their production. 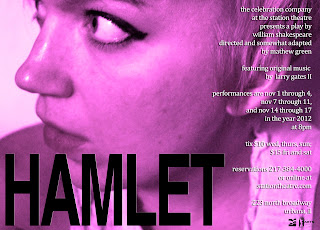 Lindsey is also a writer, editor and all-around interesting person. This is only the tip of the iceberg of questions I need to ask her! But we started with Or, and this is what I found out...

Playing Aphra Behn is certainly different from playing Hamlet, which I think was your last role at the Station.

Hamlet meant great satisfaction at the culmination of a high-pressure role and loads of work. I actually signed on for Or, while Hamlet was still running, with the trust that it would be a lighthearted, sexy jaunt under Kay’s nurturing direction. And so far, Or, has been exactly that experience, with many lovely additional flourishes.

Do you have a favorite role? Is there a particular kind of character or play you are most attracted to?

I started acting with intent when I was thirteen and have stumbled alongside local theater seasons since, but I don’t pursue much interest outside of performance and patronage. I don’t keep up with new scripts or have a list of ideal roles in mind. Meanwhile, live theatre performance has turned out to be the most transformative habit of my life. I’m secretly very shy, and maybe because of that, performing is a compulsion I've indulged since I was very small. Theatre is an exercise in emotion and stories and balance. I learn more about life and other people and the human experience through it. So, at the risk of sounding too Pollyanna, every role is a dream role. I’ve been very lucky.

Tell me about the play Or,. If I’m putting this together correctly, it involves Restoration playwright Aphra Behn, the king, Nell Gwynne and spies. As well as Behn trying to get some work done in the midst of chaos. And kind of mixed with some modern twists. How would you characterize the play?

The play is ultimately about Aphra Behn running full-bent after a golden theatrical opportunity, one she knows will launch her legacy into that of “the f*cking immortals,” and Charles II, Nell Gwynne, and her former partner in the spy game, William Scot, bursting in and bringing delightful distraction with them. It’s fast-paced, clever, bold, and not a little bawdy. And Or, is one rare instance where female empowerment and sexiness aren’t mutually exclusive. In fact, that sexiness is really borne of the women in the play reveling in their freedom to ask for exactly what they want, both in and out of the bedroom.

How would you describe the real Behn versus the Or, Behn?

Lucky for me, very little is known for sure about the real Aphra--she’s indeed considered the first professional female writer, she was indeed a royal spy, she did indeed work with William Scot (whose father was part of the group who prosecuted Charles I and was later hanged for regicide when Charles II was restored to power), and she did indeed spend time in debtor’s prison, which is where the play opens. Much of the rest is a blank page, and filling it in has been pure fun.

However you look at it, Aphra Behn had to be pretty amazing to forge ahead and make a career for herself as a playwright (and a female playwright at that -- inconceivable!) during this period in English history. What do you think makes her different?

Aphra says early on that she “crave(s) glory.” It’s so often the role of women to soften ourselves, to quiet down, to delay our desires and shrug off our talents. Deflecting and downplaying our joy becomes such a habit that we expect it even from ourselves. Kay recently mentioned the word “monomaniacal” in reference to Aphra, and that’s been my mantra ever since. Yes, Aphra wants to screw around with other interesting and passionate and talented people; she wants to help her friend in his moment of crisis; but above all, she is wildly desirous for glory and recognition and heroism. She wants to write. So it’s my exhilarating job to keep that brass ring hung way up high and to keep that spirit pumping through me every second.

As I said to Kay Holley, I think Liz Duffy Adams is a newcomer with a fresh and distinctive voice. What are your biggest challenges in working with Adams' words?

The main reasons this little play is tough are also some of the reasons it’s wonderful--because of the farcical nature and because Adams dabbles so much with mixing time periods. There are sections written in iambic pentameter; there are parts where the “fourth wall” bends a bit. Our delivery swings between presentational and intimate. From a technical perspective, I’m lucky in that I only participate in a little of the door-slamming and in none of the backstage quick-changes--there are several moments where one of my castmates disappears and then returns several seconds later as a completely different character. I don’t envy them that, though it’s delightful to watch from my steady onstage perch.

Have you worked with Kay as a director before? What about the rest of the cast?

This is my second time being directed by Kay, the first being Becky Shaw last season, which also featured Mathew Green. Working with Kay, from day one, is uniquely transformative. She’s so emotionally intelligent, such an empath. And she starts the process with implicit trust in her actors, so we’re really cut free to progress as quickly as we want or as carefully as we need.

I mention Mathew because I’m consistently amazed at how clearly our characters appear out of the ether when we’re working on a scene together, under Kay’s direction. It’s some kind of theatrical alchemy for me. He moves with complete purpose from the word go and never plays a scene by rote. Engaging with him onstage sharpens my instincts. You’ve got to be alert to keep up.

And I’d be absolutely remiss if I didn’t mention Stephanie Swearingen, a relative newcomer to the Station and a devastatingly adorable Nell Gwynne (and several other characters). Stephanie was tasked with venturing out of her comfort zone in this production, and now she’s just doing a bold Mexican hat dance over that line every night. It’s my pleasure to be onstage with her and to witness her progress.

Oh, and that Gary Ambler is okay, too. He’s a cute kid, lots of promise.

Thanks, Lindsey! I can't wait to see Or,!