TIME STANDS STILL Is Shattering and Unforgettable at Heartland Theatre 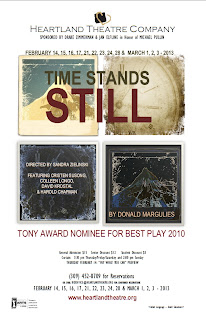 Just into Act II of Donald Margulies' Time Stands Still, the characters are discussing a hot new play that two of them, James and Sarah, saw recently.

It's clear that James, a journalist, did not like the play, even though its subject matter -- Middle Eastern atrocities -- is exactly what he and Sarah, a photojournalist, have spent their professional lives covering.

Richard, their editor, asks why they went to see it in the first place. Sarah notes that it got an "incredible review."

And then Richard's much younger girlfriend, sweet, naive Mandy, offers that she prefers musicals and can't understand why people would pay so much to see shows that depress them. "I'm with you, kid," says James.

Part of the beauty of Time Stands Still is that Margulies gives equal time to both viewpoints, not just in terms of entertainment, but also in career and work. Is it better to spend your life in the midst of chaos, adrenaline, tragedy, to feel that you are doing important work and using your time on earth on important principles? Or is it okay to look for something calmer, gentler, safer, to surround yourself with beauty and love and comfort instead of just pain?

So if Margulies, through James and Mandy, is suggesting that it's fine to reject theater that is "Shattering!" and "Unforgettable!," he's also written a play that is both. And Heartland Theatre's production of Time Stands Still, directed by Sandra Zielinski, succeeds amazingly well as a "Shattering!" and "Unforgettable!" piece of theater. There are no easy answers here, no easy characters. Instead, we see people who truly believe in where they are at this moment, who want to connect emotionally, who do love each other, but can't get past the divide between them. James has grown past needing to feel shattered to know he's alive. But Sarah... She fiercely believes in the power of reporting. She can't change the world or its horrors. But that's not her job. "I'm there to take pictures," she tells us.

On paper, Sarah may seem unsympathetic and unreasonable at times. But on stage at Heartland, Cristen Susong gives her the touches of warmth and humor that help us understand why James tries so hard to save her, to love her, to keep her in his life. Dave Krostal also offers a 3-D portrait of James, with a little panic and instability under the Nice Guy surface, reminding us that he, too, has his demons. Together, they seem like the kind of couple who's been together forever, who can read each other, who just click. And that's what makes their troubles so moving. Kudos to both Susong and Krostal for terrific work, and to director Zielinski for choreographing their scenes perfectly.

If Margulies has created valid arguments for both sides of his central conflict, he has also mixed enough humor into the play to temper the angst. Zielinski and her actors navigate those shifts in mood and tone without a hitch, as the entrance of Richard and Mandy, his inappropriate girlfriend, takes the action in a completely different direction, one that exposes the "women" side of "women's work" along with an exploration of compassion versus objectivity. It helps that Harold Chapman, who gives Richard a gruff sweetness, and Colleen Longo, a lively and engaging Mandy, invest as fully in their characters as Susong and Krostal, making them worthy adversaries and friends as the issues in the play develop.

Kenneth P. Johnson's spartan Brooklyn loft setting provides a neutral battleground at the same time it neatly defines Sarah and James and their lack of roots, showing once again that the intimate space at Heartland is exactly the right place for thoughtful, personal drama.

There are only two performances left of this shattering, unforgettable piece of theater. You are well-advised to pack the place tonight at 7:30 pm or tomorrow at 2 pm.

For reservation information, click here.
Posted by JulieK at 12:57 PM