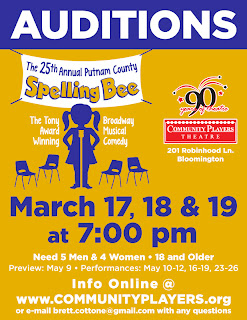 Community Players and directed Brett Cottone have announced auditions for their upcoming production of The 25th Annual Putnam County Spelling Bee, the musical comedy about kids trying to spell well enough to win a trophy with music and lyrics by William Finn and book by Rachel Sheinkin.

The 25th Annual Putnam County Spelling Bee was a huge hit in New York and it's been popping up all over on tour and in regional theaters. It's an adorable show with a little bite, as we see sweet kids and Bee personnel -- all with some eccentricities -- who are maybe a little too wrapped up in winning for all the wrong reasons. Parental interaction (and lack thereof) plays a big part in The Bee's plotlines, as does audience interaction, when lucky volunteer spellers get to share the stage to compete against the cast (in character, of course).

So here's the scoop on Community Players' production and how you can audition to be a part of it, courtesy director Brett Cottone:

The 25th Annual Putnam County Spelling Bee is a hilarious tale of six adolescent outsiders vying for the spelling championship of a lifetime. The show's Tony Award winning creative team has created the unlikeliest of hit musicals about the unlikeliest of heroes: a quirky yet charming cast of outsiders for whom a spelling bee is the one place where they can stand out and fit in at the same time.

For Mature Audiences - Casting limited to 18 and older.

Please prepare 16 - 32 bars of music to be played by piano accompaniment. No pre-recorded accompaniment allowed. Please dress appropriately for a dance audition. You will also be asked to read selected passages from the script.

CHIP TOLENTINO - A boy scout and champion of the Twenty-Fourth Annual Putnam County Spelling Bee, he returns to defend his title, but he finds puberty hitting at an inopportune moment. C3 - B4 Tenor

DOUGLAS PANCH - The Vice Principal. After five years' absence from the Bee, Panch returns as judge. There was an "incident" at the Twentieth Annual Bee, but he claims to be in "a better place" now, thanks to a high-fiber diet and Jungian analysis. He is infatuated with Rona Lisa Peretti, but she does not return his affections. (non-singing)

LEAF CONEYBEAR - The second runner-up in his district, Leaf gets into the competition on a lark: the winner and first runner-up had to go to the winner’s Bat Mitzvah. Leaf comes from a large family of former hippies and makes his own clothes. He spells words correctly while in a trance. In his song, "I'm Not That Smart", he sings that his family thinks he is "not that smart," but he insinuates that he is merely easily distracted. Most of the words that he is assigned are South American rodents with amusing names. A2 - G4 Baritone or Tenor

LOGAINNE SCHWARZANDGRUBENIERE (SCHWARTZY) - Logainne is the youngest and most politically-aware speller, often making comments about current political figures, with two overbearing homosexual fathers. She is somewhat of a neat freak, speaks with a lisp, and will be back next year. C4 - D5 Soprano

MARCY PARK - A recent transfer from Virginia, Marcy placed ninth in last year’s nationals. She speaks six languages, is a member of all-American hockey, a championship rugby player, plays Chopin and Mozart on multiple instruments, sleeps only three hours a night, hides in the bathroom cabinet, and is getting very tired of always winning. She is the poster child for the Over-Achieving Asian, and attends a Catholic school called "Our Lady of Intermittent Sorrows." She is also not allowed to cry. B3 - E5 Soprano/Mezzo-Soprano

MITCH MAHONEY - The Official Comfort Counselor. An ex-convict, Mitch is performing his community service with the bee, and hands out juice boxes to losing students. E3 - A4 (B4) Tenor

OLIVE OSTROVSKY - A young newcomer to competitive spelling. Her mother is in an ashram in India, and her father is working late, as usual, but he is trying to come sometime during the bee. She made friends with her dictionary at a very young age, helping her to make it to the competition. B3 - F#5 Soprano

RONA LISA PERETTI - The number-one realtor in Putnam County, a former Putnam County Spelling Bee Champion herself, and returning moderator. She is a sweet woman who loves children, but she can be very stern when it comes to dealing with Vice Principal Panch, who has feelings for her that she most likely does not return. Her favorite moment of the Bee is in the minutes before it starts, when all the children are filled with the joy of competition, before they begin to resent each other. Ms. Peretti herself won the Third Annual Putnam County Spelling Bee by spelling "syzygy," which she recounts at the very beginning of the opening number. C#4 - Ab5 Soprano

WILLIAM BARFEE - A Putnam County Spelling Bee finalist last year, he was eliminated because of an allergic reaction to peanuts. His famous “Magic Foot” method of spelling has boosted him to spelling glory, even though he only has one working nostril and a touchy personality. He has an often-mispronounced last name: it is Bar-FAY, not BARF-ee ("there's an accent aigu," he explains with some hostility). He develops a crush on Olive. Eb3 - Bb4 Tenor

Please note that Leaf Coneybear is my personal favorite character and I don't like Monsieur Barfee at all. Him and his fancy foot spelling technique! Harumph! But your mileage will certainly vary, and you can pick your own favorite to root for at The Bee when Players puts it on in May. Until then, if you have a hankering to spell (and sing) words like hankering, you'll want to show up to audition for The 25th Annual Putnam County Spelling Bee.

For more information, you can visit the Community Players website or email brett.cottone@gmail.com
Posted by JulieK at 12:54 PM