Everybody Ought to Know SWEET LITTLE DEVIL 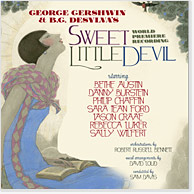 I've had a copy of the PS Classics studio cast recording of Sweet Little Devil, a long-lost Gershwin musical comedy from 1924, since last summer. I've been listening to it like crazy ever since. It's been the one cd in my car since I first got it, so I listen to it every time I drive anywhere. About once a month, my friend Jon asks if I'm ever going to write about it. And I say, yes, yes, I totally am, but... Not yet.

Why not? I don't know. I've tried to peer into the murky depths of my psyche to figure out why I don't write about this charming little piece of musical theater history. I think the answer is that I love it too much. I haven't wanted to share. As it happens, I have become a little obsessed with it. For me, it's a perfect slice of Broadway in 1924. That's always been my go-to place and date for time travel, but I was expecting to pop in on Fred and Adele Astaire in Lady, Be Good! in December 1924. Now I have to set up my timetable and get there by May to see Sweet Little Devil first.

My obsession may seem strange for a lighter-than-air confection that sounds kind of like Gershwin but also kind of doesn't, that wraps its story around chorus girls with their eye on the main chance and the dopey swains who are smitten with them. But what's great about Sweet Little Devil is that pretty much everybody has a wicked streak. That's where the "devil" in the title comes in. Chorines Joyce and May are trying to take poor Tom and Fred, engineers just back from Peru with a big paycheck from the New York Central Railroad, for every fur coat and diamond ring they can get, and Joyce's manager, Sam, is the one plotting the worst schemes. Even our ingenue, Virginia, who is Joyce's younger cousin, has been less than honest. After all, she sets the plot in motion by intercepting and responding to Joyce's fan mail, including exchanging love letters with Tom in Joyce's name. Is Tom in love with Joyce, the face he saw in the pictures, or Virginia, the would-be romance writer behind the wonderful letters? You probably already know the answer to that, but it doesn't affect the breezy fun in the show, fueled by the infectious melodies of George Gershwin's score and Buddy DeSylva's delightful (and snarky) lyrics.

Early on, there's the saucy duet "You're Mighty Lucky," where Sam and Joyce boast about how fortunate the other should feel to have a guy or gal this cool. "Lots of nifty dames were after me, babe," sings Sam, including Gloria Swanson, Mary Pickford, and both the Gishes, who think he's delicious. Joyce makes "every fellow prove he's more than a star in movies," which is why she danced with the Prince of Wales but rebuffed Charlie Chaplin. On this restored version, real-life spouses Rebecca Luker and Danny Burstein are absolutely adorable singing this "Lucky" tune. It was my favorite at first listen, and it's still taking top honors for me.

I wasn't as crazy about "Virginia," where our heroine continues to push down the temptation to be bad, or "The Jijibo," the obligatory dance craze number given a bouncy ragtime beat. This one is supposed to serve as both a weight-loss and face-plumping charm. Everybody ought to know the Jijibo! Both songs have grown on me, with Sara Jean Ford's lovely voice infusing "Virginia" with appeal, and the blend of voices building "The Jijibo" into something special. I can't help but wonder what this dance would look like, especially if the dancers are referring to a copy of the choreography pasted in their hats, as the lyrics instruct.

Second couple May and Fred, sung here by Sally Wilfert and Jason Graae, lead "The Jijibo" as well as "Under a One-Man Top," for my money the prettiest love song in the score. Still, "Just Supposing," a pretend-we're-in-love ditty sung by Ford and Philip Chaffin, as Tom, who is Mr. Right even if he isn't that bright about women, is pretty darn cute.

Just enough of the show's book (from Frank Mandel and Lawrence Scwab) is included here to make the plotlines clear, and also to give us amusing line readings, especially from Burstein, Chaffin, Luker and Bethe Austin, whose squeaky Betty Boopy makes Joyce's long-suffering maid stand out.

So why was Sweet Little Devil forgotten? Why did George Gershwin's earliest surviving score fall off the map?

Tommy Krasker, the man behind PS Classics, who also produced the album and wrote the liner notes, has some thoughts about that and also how and why he pulled it out of obscurity for this recording. It's a fascinating read about a fascinating footnote in American musical theater. Now all we need is for someone to take this studio cast, the original Robert Russell Bennett orchestrations created for the touring version of Sweet Little Devil that Krasker uses to such good advantage here, and put the show on stage. Put this show on stage! Now!

And buy the cd while you're at it. Maybe if it is a runaway hit, somebody will get the idea it needs to be staged.
Posted by JulieK at 1:22 PM