CITIZEN KANE Tonight and Tomorrow at the Normal Theater 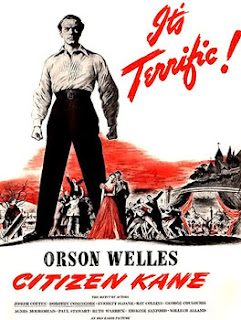 For 50 years, Citizen Kane, Orson Welles' first feature film, sat at the top of the Sight & Sound critics' list as the best movie ever made. Not because it featured glossy stars or exciting special effects, not because it broke box office records or started a cult. In fact, it did none of those thing. But, as Sight & Sound noted in 2002, the "Dazzlingly inventive" and "technically breathtaking" Citizen Kane "reinvented the way stories could be told in the cinema, and set a standard generations of filmmakers have since aspired to. An absorbing account of a newspaper tycoon’s rise to power, Orson Welles’ debut film feels as fresh as tomorrow's headlines. And he was only 26 when he made it."

And then came 2012. For the first time since the Sight & Sound poll started, Citizen Kane was not No. 1. Nope. As of 2012, Alfred Hitchcock's Vertigo was King of the Cinema Hill.

But I'm still firmly on the Citizen Kane team, and not just because my favorite professor from college, Robert Carringer, wrote the book on how Citizen Kane got made (and at one time, owned one of the copies of Rosebud, the sled that drives the movie.) So, yeah, a good portion of my film education was about Citizen Kane. But even so... Citizen Kane's advances in cinematography, music and cinematic storytelling are simply unmatched. Gregg Toland, the cinematographer, Herman J. Mankiewiecz, the screenwriter, and Bernard Herrmann, the composer, all shared in what's so special about Citizen Kane. Plus there's Welles himself, of course, along with Joseph Cotten, Agnes Moorehead, Everett Sloane, Dorothy Comingore, Erskine Sanford, George Coulouris, and All My Children's own Ruth Warrick, each turning in a terrific performance that adds a piece or two to the Kane puzzle.

Sorry, Vertigo. Yes, you're an interesting movie, even if you are kind of heavy on the misogyny thing. But you're no Citizen Kane.

The Normal Theater has two more showings of The Greatest Movie Ever Made, the one that pushed the industry and the art forward, that said, yeah, we can poke pointy sticks at the likes of media magnate William Randolph Hearst (the model for Charles Foster Kane) even when he tries to shut us down, yeah, we can examine what happens to the ideals of youth and how power and wealth can turn a man into something even he doesn't recognize, what any of it means when a man is old and alone in the empty mansion he built. Brash, arrogant, charismatic Orson Welles burst through the door with this movie with all the bravado of youth, at a time when movies were still young, too. .

So go see it on the big screen. See what Orson Welles meant to the world of movies in 1941 and what he still means.
Posted by JulieK at 4:04 PM