Chicago's City Lit Theater is big on adaptations of literary work. Their current show is adapted from Grace Metalious's "Peyton Place," that provocative piece of fiction from the 50s that sparked the American imagination and spawned a whole lot of soap operas. In their 30-year history, as their website tells us, City Lit has "explored fiction, non-fiction, biography, essays, and drama in performance while presenting a wide array of voices from classic writers such as Henry James, Edith Wharton, Oliver Goldsmith, Mark Twain, Colette, and P.G. Wodehouse to such contemporary writers as Alice Walker, W.P. Kinsella, Douglas Post, Raymond Carver, Edward Albee and Ruth Prawer Jhabvala."

It's a noble aim, to try to put literature on stage -- there's a huge range of possibilities, from David Edgar and the Royal Shakespeare Company with Nicholas Nickleby to the big boffo musical Les Miserables to Steppenwolf making a mark with The Grapes of Wrath back in 1988 -- and City Lit is doing its best to encourage all of them. 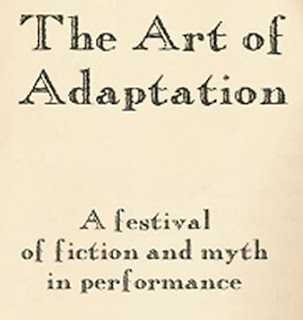 City Lit is once again offering The Art of Adaptation, a contest and festival celebrating non-dramatic works adapted for the stage. Last year's winner was LIAR! a play by Jordan Mann based on one of the stories in the book "I, Robot" by Isaac Asimov. Other pieces performed in 2012 included adaptations of work by F. Scott Fitzgerald, James Joyce, William Shakespeare and Neil Gaiman.

For this year's competition, the rules for would-be adaptor/playwrights include a time length (5-20 minutes in performances) and simple set requirements. City Lit is looking for six to eight plays, each adapted from a part of a novel, short story, essay, memoir, poem or any other kind of literary material that is not already a play, to perform on their stage in July. For all the submission details -- including info on the $500 prize -- you can check the League of Chicago Theatres Collective Leverage blog, which announced this year's contest. Note that they are looking for a proposal, including a one-page description of the work and ten pages of the script, and the deadline for those proposals is May 31, 2013. That gives you a little time to get that adaptation in order.
Posted by JulieK at 10:54 AM

Email ThisBlogThis!Share to TwitterShare to FacebookShare to Pinterest
Labels: City Lit Theater, The Art of Adaptation