Is It Fiction? Is It History? Or Is It OR? Kay Holley on OR at the Station Theatre 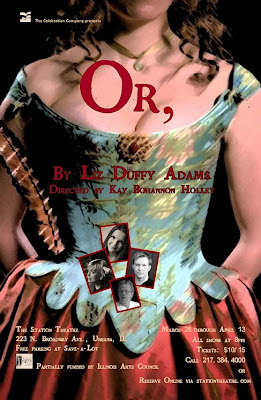 Liz Duffy Adams' irreverent and clever comedy Or, a time-twisted romp through one imaginary night in the life of Restoration playwright Aphra Behn, opens next week at Urbana's Station Theatre. Behn is a fascinating figure, not only because she was probably England's first female playwright, or because she was among the first playwrights in the history of English-speaking theatre to make a living at it. There's also the spy factor. The saucy humor. The wit. The gender-bending and cross-dressing.

It's no wonder Behn caught the imagination of a playwright like Adams, who uses humor and lively writing to juggle poetics and pop culture, the past and the present, looking at theater then and theatre now to tell us something about ourselves. In Or, Adams spins an outrageous and wonderful story around this fictional version of Behn, still a spy but trying to get out of that dangerous trade by writing a play, as she does her best to resist the amorous advances of King Charles II, the famous actress Nell Gwynne, and a shady ex-lover who is also a double agent -- all in one night!

In order to understand more about Or and the Station's upcoming production, I posed a few questions to director Kay Bohannon Holley, always a strong presence in the Celebration Company in whatever role she's playing. So here's what Kay had to say about her own past and present, and her experience with theater then and theater now.

I know you've been associated with the Station for a long time and you've directed a lot of very intriguing shows. What was the first show you directed at the Station?

The very first show I directed was Edward Albee's play Three Tall Women. As it turns out, three of the fourteen shows (I think . . .) I've directed have been Albee.

Aside from the Albee, do you have any favorites or any shows that stand out over the years?

I have different favorites for different reasons--some shows bring a unique emotional or even spiritual perspective to my life. Some are intellectually challenging. Some are wonderful because of the people I'm working with. I've pretty much loved them all. Copenhagen was the most difficult text I've worked with, and one of the biggest acting challenges I've shepherded actors through, so I am very proud of that production. Fortunately, I had three very fine actors in Steve Keen, Gary Ambler and Joi Hoffsommer. Wit was a deeply satisfying emotional experience, both as a play and because of the wonderful actors I worked with, including a beautiful performance by Barbara Evans. All of the shows I've directed with Gary Ambler and Joi Hoffsommer have been amazing because those two are so good -- and so good together on stage. They're my Tracy and Hepburn. Almost, Maine was a beautiful way to spend the holiday season and last year, Becky Shaw was a great opportunity to work with some of the Company's younger actors on a very "up to the minute" kind of play. Well, you see what I mean. There's something to love in all of them.

How did you come to directing in the first place? Do you have a specific directing philosophy?

I didn't set out to be a director, exactly. My degrees are all in what used to be known as "Oral Interpretation," so I've been involved in performance all along--and had directed as part of my work at the university. Gary Ambler encouraged me to direct at the Station and now I suppose I consider myself more a director than an actor. I'd start sounding really pompous if I tried to articulate a "philosophy of directing" for you. Suffice it to say that I think of myself as a storyteller and of theatrical art as a gorgeous exploration of what it means to be human.

Liz Duffy Adams isn't that well-known a playwright, although what she is known for is a distinctive voice. How do you see Or? Is there anything in particular that draws you to Or?

I frankly don't know much about Adams, beyond what I've read in brief biographical blurbs. I know that she has received acclaim as a playwright of great promise -- having plays produced at the Humana Festival and working with the Women's Project. But oh -- what a text. When Rick Orr [Station Theatre Artistic Director] handed me this play two years ago, he said it was "a little gem." And that image has stuck with me -- only now it's become a colorful jewelry box -- and when you open it up, delightful things spill out.

There are several things that draw me to Or. First, I've long been fascinated by the Restoration period. Perhaps this dates back to my seeing Forever Amber as a kid and just being spellbound. Secondly, it is a delightfully bawdy little play.

More importantly, though, I am drawn to the character of Aphra Behn, both in literary history and as she is drawn in the play. Aphra, as we meet her in the play, is a woman on fire with her passion for writing. And, as full of life and love and lust as she is, it is the writing that surpasses all. In fact, all of the women characters in the play are women who are doing things women haven't done before--Aphra as a poet and playwright, Nell as an actress and Lady Davenant as the manager of a major theatrical company. I am hopelessly attracted to the courage and liveliness of women blazing trails. Perhaps Aphra Behn in life was not the world's best playwright; the very fact that she was one at all -- insisted on being one -- burned to be one -- is what moves me.

Did you have any particular opinion about Aphra Behn before this show?

I had read Behn's "Oroonoko" in college--and had not found it particularly compelling reading. However, perhaps with Virginia Woolf as my guide, I had a deep appreciation of Behn's importance as a literary figure and an inspiration to women writers since.

What do you think the title means?

Literally, it is a reference to the Elizabethan and Restoration habit of giving their plays ponderous titles that had the word "or" in them. Adams also tells us in the prologue of the play that the word links that which seems opposite -- as in "gay or straight," "boy or girl," "cheap hackney trash or art." I think one of the "links" that Adams likes is the link between seemingly different eras. She sees patterns in the Restoration era that reverberate into the 1960's/Vietnam era and even into our own post-9/11 era.

Tell me about your cast and who's playing what.

I have a really great cast: Lindsey Gates-Markel is playing Aphra. The other cast members are Mathew Green, Stephanie Swearingen and Gary Ambler. They light up the stage.

Is the show turning out to be what you thought when you first got the script, or is it taking off in unexpected directions?

Shows always go in unexpected directions when you bring the words up off the page and let good actors at them. It is the sexy jewel that I expected and so much more.

And finally, why do you think Or fits the Station and what it does? Why should Station fans -- or newcomers -- try Or?

The play mostly takes place in one place and one time -- so that lends itself to the intimate space of the Station. I think Station regulars will love seeing some of their favorite actors in such a funny, sexy show. And I think it will make newcomers want to come back.