Will a Saturday Night Slot Be the Swan Song for SMASH? 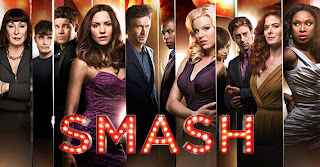 I wanted Smash to work. I really did. I love Broadway and its stars and the notion of a backstage Broadway musical on television sounds like heaven to me.

But it didn't go well during the first season with creator Theresa Rebeck's at the helm as producer. Everybody and his grandmother -- and I! -- offered suggestions on how to fix Smash's sinking musical ship once Rebeck was given the heave-ho and Josh Saffran (from Gossip Girl) took over. Yes, there were multiple issues. Plots were set up and then abandoned, the marital woes of at least two of the characters (lyricist Julia, played by Debra Messing, and producer Eileen, played by Anjelica Huston) were tiresome, Messing's wardrobe was laughable, there were too many stray men running around, and Marilyn Monroe was a lame idea for a musical, anyway, as evidenced by the existing Marilyn musical that only ran for 17 performances.

But all of that was small beans compared to the huge problem at the core of Smash as written and produced. In a cast full of Broadway stars, somebody -- maybe Rebeck, maybe exec producer Steven Spielberg, maybe Simon Cowell for all I know -- decided to build the show around the character of Karen, as played by American Idol runner-up Katharine McPhee. Karen was a dewy-eyed newcomer from Iowa, living off her rich, sweet, handsome boyfriend, walking into auditions and knocking all the bigwigs off their pins. "She's fantastic!" they told us. "She's a star!" "She captures Marilyn!"

And when I say "they told us," I mean exactly that. Every week, the scripts told us that Karen was the biggest thing to hit Broadway since Mary Martin, that she was the pinnacle, the be-all, the end-all, the megawatt star to end all stars. But what did they show us? As personified by McPhee, we saw a Karen who was a whiny, listless little nothing, a pouter, a moper, someone who expected stardom to land in her lap with no work or commitment whatsoever. I don't care how many times you tell me someone is fabulous if I can see with my own eyes she ain't.

That problem was only exacerbated by the competition. When Smash began, there was supposedly a competition for the role of Marilyn between McPhee's Karen, the newcomer, and Megan Hilty's Ivy, a more experienced Broadway performer desperate to break out of the chorus. Hilty, and by extension Ivy, really was as magical as Karen was not. Hilty's Ivy could sing. She could act. She could project Marilynesque qualities. She had "it" written all over her. And the more the powers behind Smash tried to tell us it wasn't so, that up was down, that in was out, that Karen was perfection while Ivy was a loser, the more Smash looked like a bust.

In order to retool Smash for its second season, Saffran (or somebody above or below him on the foodchain) fired a few extraneous men, ditched Julia's scarves of disrepute, and hired more bona fide Broadway folks. That included Jeremy Jordan, fresh off the successful Newsies, and Krysta Rodriguez, who'd created the role of Wednesday Addams in The Addams Family musical, as well as offering short runs to TV star Sean Hayes and another American Idol alum, Oscar and Grammy winner Jennifer Hudson.

You will not be surprised to hear that Jordan, Rodriguez and Hudson were added to prop up Karen as a new love interest, roommate and mentor, respectively. Meanwhile Hayes is playing Ivy's co-star in a musical based on Dangerous Liaisons. He's a TV star who thinks potty jokes are the height of show biz excellence. He's a Stooge, a Jerry Lewis, an Adam Sandler, if any of those guys were stupid enough to bring that shtik to a Broadway musical. Of course Ivy is sharing a show with him.

Karen (who is perfectly perfect in every way, in case you didn't get the message) is playing saviour and goddess to a songwriting duo trying to get their musical off the ground and continuing to blow away all the Broadway powers-that-be, while Ivy is trying to survive a show opposite fart jokes. The handwriting is on the wall: Marilyn will be a mess again, Karen will bail in favor of the real, cool, authentic musical her new boyfriend is writing, and it will come down to Karen vs. Ivy for the Best Actress Tony, just like All About Eve. Hmmm... I wonder who will win the Tony? Maybe Karen? Or Karen. I suppose there's a chance Karen could win. No, definitely Karen.

So, as these new plot developments creaked along, the show continued its campaign to proclaim Karen as the second coming. And the ratings were terrible. There was some noise that NBC didn't care about the sad ratings because they were making money off the music from the show, but seriously... How many people buy music from a show they're not watching?

So when the news came last week that NBC had decided to move the show to Saturday, thereby sounding its death knell for all intents and purposes, no one should've been surprised. Well, maybe about the Saturday part. If Friday has been the Siberia of the TV landscape, the place where unwanted shows go to die, then Saturday has been Antarctica. It's the place of reruns and repurposing, of Cops, Pawn Stars and American Ninjas. I can't remember the last time I looked for original programming during Saturday primetime.

Although the next three episodes will air in the familiar Tuesday night slot, NBC will burn off the rest of its new Smash episodes on Saturdays at 9 Central time starting April 6. Note that Episode 17, which is set at the Tony Awards (told you so about that plot inevitability -- bet on Karen to walk away with the trophy while Ivy drowns in her tears) will be the series finale. It's scheduled for May 25.

Show runner Safran told TVLine he was "saddened" and "surprised" about the move to the basement of NBC's schedule. Let that be a lesson to the arrogant, the muckety mucks, the guys at the top of TV's heap. You can't ignore complaints raining down on your head forever if you want your show to stay alive. And seriously, guys. When a hundred critics tell you that you've made a mistake in casting your lead, CHANGE YOUR MINDS. Do something. Fix it. I fear that Broadway is now as dead as Smash when it comes to material for television shows. And how stupid is that? Broadway shouldn't have to take the rap for the dunderheaded moves behind the scenes of Smash.
Posted by JulieK at 6:18 PM