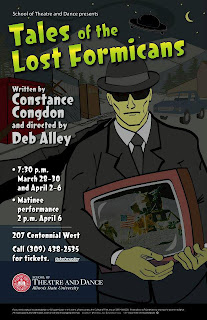 I was just reading about a video purporting to show that there are shapeshifting alien reptile guards looking out for the President. That "evidence" is being used to bolster the theory that President Obama is part of an intergalactic conspiracy between an earthly elite and alien overlords eager to use earthlings like puppets. Or maybe to eat them. (Is the shapeshifting alien reptile guardian force carrying copies of "To Serve Man"?)

The video showing this alleged alien sounds like something just right for the conspiracy theorist character in Constance Congdon's Tales of the Lost Formicans, a 1989 play about life on earth, here, now (or at least in the 80s), with all its earth-bound complications and limitations, framed by a pack of alien archeologists from the future trying to make sense of us.

In Deb Alley's production of Tales of the Lost Formicans for Illinois State University, performed in the small theater space called Centennial West 207, the limitations of life on earth are front and center. We see again and again how ephemeral and impermanent our world is, how each of the things we cling to to give life meaning -- lovers, parents, children, possessions, careers, passion, memory, the place we call home -- will crumble, tumble or go up in smoke.

Congdon's script is a little funny, a little strange, quite thought-provoking, and in this ISU version, sad, too. There's bittersweet humor in the travails of Cathy, the woman who comes back home to Colorado, her foul-mouthed son in tow, when her marriage breaks up, only to find her old suburban neighborhood is falling apart, Dad is losing his mind, and Mom can't quite deal with any of it.

The story of Cathy's father, Jim, once a man who could fix anything but now just a shell, wandering around wondering where he is and where his mixed-up memories are leading him, is especially poignant, aided by a lovely performance from Joe Faifer, who can nail a comic backwards scene one moment and break your heart talking about sheet rock the next.

Hananiah Wiggins is also touching as the conspiracy nut who has all the wrong moves when it comes to human interaction, while Michele Stine keeps the center of the play steady and strong as Cathy, our Everywoman guide. Jaqueline Dellamano and Carlos Kmet are on target as Cathy's mom and son, and Jenna Liddle adds abundant energy and edge as Cathy's old friend, a divorced mom who is well over the line into a nervous breakdown. Keith Jackewicz rounds out the cast in multiple roles, most notably as the main alien observer who runs the show.

Andrew Sierszyn's off-balance set and its bits and pieces of late 20th century Americana give the production the right sense of unease, especially that upside-down door, while Deanna Durbin's orange and brown and argyle costumes show a period of our fashion past that should probably stay buried.

Tales of the Lost Formicans is not an easy show to wrap your head around -- you'll want to discuss and maybe argue about it with your friends after the show -- but it's certainly worth your while to do so. There are a lot of ways to interpret Congdon's cosmic little script. Mulling it over, I decided it was about mortality, about insignificance, about how we try to make sense of things that just can't be explained. Or, you know, life.

TALES OF THE LOST FORMICANS
by Contance Congdon

Running Time: 2:20, including one 15-minute intermission