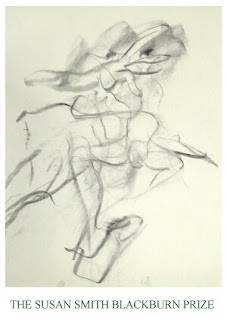 The Susan Smith Blackburn Prize, awarded annually to honor and celebrate female playwrights who "have written works of outstanding quality for the English-speaking theatre," was given to Annie Baker this week for her play The Flick.

The Flick is currently enjoying an extended run at Playwrights Horizon in New York. That's the same theater that produced Baker's Circle Mirror Transformation, chosen as one of the Best Plays of 2010 and honored with an Obie Award as Best New Play.

Playwrights Horizon describes The Flick this way: "In a run-down movie theater in central Massachusetts, three underpaid employees mop the floors and attend to one of the last 35 millimeter film projectors in the state. Their tiny battles and not-so-tiny heartbreaks play out in the empty aisles, becoming more gripping than the lackluster, second-run movies on screen. With keen insight and a finely-tuned comic eye, The Flick is a hilarious and heart-rending cry for authenticity in a fast-changing world."

Like Baker's other plays, The Flick uses humor, insight and a sweet touch with the human heart to comment on how we communicate. Or try. Writing about The Flick for The New York Times, Charles Isherwood called Annie Baker "one of the freshest and most talented dramatists to emerge Off Broadway in the past decade," as he noted that "this lovingly observed play will sink deep into your consciousness, and probably stay there for a while."

The other nine finalists for the 2013 Susan Smith Blackburn Prize were:

Ardiff is Irish, while Bruce, Chandler and King are from the United Kingdom, Baker, Herzog, Marks, Schwartz and Volpe are American, and Betts hails from New Zealand.

The Susan Smith Blackburn Prize is celebrating its 35th anniversary this year. The winner receives a prize of $20,000 plus a signed and numbered Willem de Kooning print made especially for the award. Other finalists are awarded $1,000 each.
Posted by JulieK at 7:56 PM