It's fitting that I was over in Champaign-Urbana yesterday*, only a stone's throw from Krannert Center for the Performing Arts, just as they were sending out emails to announce their 2012-13 schedule of programs to fill all four (five? six?) of the lovely performance spaces inside the Krannert Center. 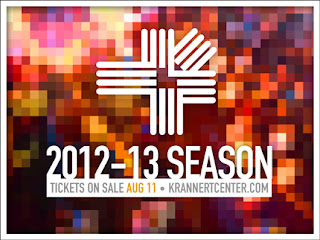 That schedule includes dance, opera, visiting artists, bands, companies, quartets and orchestras, and a good deal of theater, including the University of Illinois Department of Theatre productions in both the "black box" Studio Theatre and the more expansive Colwell Playhouse. My focus is on theater, of course, and here's what you have to look forward to if you're inclined to give Krannert Center a look: 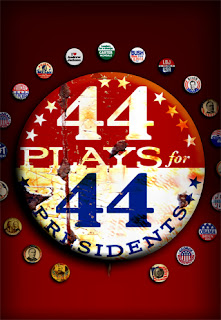 The University begins its theater season October 4 with "44 Plays for 44 Presidents," a two-hour look at each and every American president, showcased through short biographical scenes. Those scenes include comedy, tragedy, music and theatrical razzmatazz, as we see things like Ben Franklin hosting a Borscht-Belt "roast" of Thomas Jefferson and a "Nixon-praising dance number" as the company of performers passes on a star-spangled coat to represent the mantle of the presidency.

Whether this is intentional irony I don't know, but "Dracula" follows the presidents, opening October 14. There are a number of scripts that tell the "Dracula" story, and so far, Krannert's materials aren't telling which one U of I is using. Still, we can expect vampires, pale maidens, bloodlust and probably a few caskets on stage for any "Dracula."

Squeezing one last drama into October, "A Dream Play" opens on October 25. I'm assuming this is the 1901 Strindberg play, a surreal and symbolic piece that moves a man through a melancholy dreamscape filled with issues of gender, class, capitalism, philosophy, theology and the illusory, painful nature of human life. 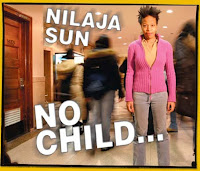 The Department of Theatre opens the new year with "No Child..." on February 13. In New York, "No Child..." was a one-woman show for actress Nilaja Sun, as well as a "tour-de-force exploration of the New York City public school system," with Sun playing kids, parents, teachers, administrators, and even the school janitor. I'm guessing that U of I will open it up to an ensemble, but we'll have to see what happens in February.

That's followed by Larry Kramer's "The Normal Heart," a call to arms about AIDS in America that was recently revived on Broadway in a very well-regarded production. "The Normal Heart" will run from March 28 to April 7.

And the Theatre Department season ends with another call to arms in "Spring Awakening," which offers a dire warning as to what happens when you keep kids completely ignorant on issues of sex and what's happening to their bodies. The original play was written by German playwright Frank Wedekind in about 1890, with a rock musical version (music by Duncan Sheik) hitting Broadway (as well as winning a slew of Tony Awards and launching the careers of Lea Michele, Jonathan Groff and John Gallagher, Jr.) in 2007. Are they doing the straight play or the musical? If I had to guess, I would say the musical. But who knows, really? Potential ticket-buyers should know that there is sex (awkward, adolescent sex) all over "Spring Awakening," which might be either a plus or a minus for you, considering your taste in theater.

Some highlights from elsewhere on the schedule:

Anne Bogart and her SITI Company bring their "Café Variations" to Krannert November 8 to 10, the U of I Opera Program performs Daniel Catán's "Florencia en el Amazonas" November 8 to 11, and "The Nutcracker," an annual holiday treat, runs November 30 to December 9. As 2013 opens, the Russian National Ballet Theatre brings "Don Quixote," "Chopiniana/Romeo and Juliet," and "Swan Lake" to Champaign in January, The Black Watch and the Band of the Scots Guards perform in February, Ann Hampton Callaway and Liz Callaway bring their sister act called "Boom!" to town February 20 to 22, and the U of I Opera Program does a concert version of "My Fair Lady" February 28 through March 3 and brings back "The Threepenny Opera" April 25 to 28.

To see the complete schedule, click here. The season brochure will be available July 20, with tickets on sale for the entire season on August 11.

*I was in Urbana yesterday to do a radio interview with Kevin Kelly at WILL for his "Live and Local" program, along with Ron Emmons, Alyssa Ratkovich and Kent Nusbaum,who are the director and cast of the play "Missed Connections," by Marj O'Neill-Butler, which is part of Heartland's 10-Minute Play Festival. Kent and Alyssa performed a piece of the play, while Ron and I talked about Heartland's contest and process. If you'd like to hear our interview, click here. Always nice to be back in C-U!
Posted by JulieK at 12:25 PM