U of I's Crystal A. Dickinson Wins Theatre World Award!

The annual Theatre World Awards, which honor performers making their debuts in "significant" Broadway or Off-Broadway productions, were handed out at an awards ceremony at the Belasco Theatre Tuesday night. Among the honorees: Crystal A. Dickinson, currently appearing on Broadway in "Clybourne Park," who earned her MFA with the University of Illinois Department of Theatre. 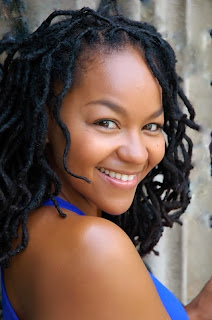 Dickinson plays Francine and Lena in the different eras represented in "Clybourne Park," which won playwright Bruce Norris the 2011 Pulitzer Prize for Drama as well as the Olivier for Best Play for its London production. Dickinson's bio notes that she was in the company of "Clybourne Park" Off-Broadway at Playwrights Horizon and in LA at the Mark Taper Forum. Her resume includes "Broke-ology" at Lincoln Center, "Ruined" at Manhattan Theatre Club, and 'The First Breeze of Summer" with Soho Rep, as well as a stint at the Illinois Shakespeare Festival and the recurring role of Melissa in Tyler Perry's "House of Payne."

According to the Theatre World Awards site, "The Theatre World Award remains the oldest award given for a debut theatre performance on or Off-Broadway. The contribution this Award has made to the theatre is incalculable. It is not a competition and is it only given once. Because it is given for a debut performance, it encourages and inspires newcomers to the stage to continue to pursue their dream. It is freely given at a time when encouragement is so necessary in an industry known more for rejection than reception."


This year's class of honorees, caricatured in the wonderful poster, reprinted above with permission of the Theatre World Awards, included Tracie Bennett ("End of the Rainbow"), Phillip Boykin ("Porgy and Bess"), Russell Harvard ("Tribes"), Jeremy Jordan ("Bonnie and Clyde"), Joaquina Kalukango ("Hurt Village"), Jennifer Lim ("Chinglish"), Jessie Mueller ("On a Clear Day You Can See Forever"), Hettienne Park ("Seminar" and "The Intelligent Homosexual's Guide to Capitalism & Socialism with a Key to the Scriptures"), Chris Perfetti ("Sons of the Prophet"), Finn Wittrock ("Death of a Salesman") and Josh Young ("Jesus Christ Superstar").

Susan Pourfar ("Tribes") was named this year's the recipient of the Dorothy Loudon Award for Excellence in the Theater.