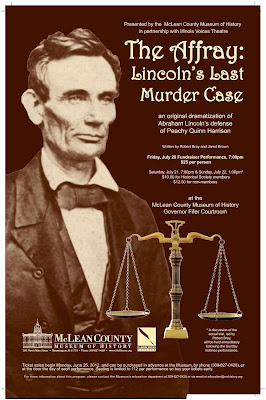 "The Affray," the Robert Bray/Jared Brown play about Abraham Lincoln's last trial before he was nominated for the Presidency, will return to the McLean County Museum of History next month. It sold out its run last July, plus seating is limited, so you are well-advised to get your tickets now if "The Affray" is something you want to see.

Tickets went on sale on Monday for this production, which is a collaboration between the McLean County Museum of History and Judy Brown's Illinois Voices Theatre. "The Affray: Lincoln's Last Murder Case" is Bray's and Brown's dramatization of The People of of the State of Illinois v. Peachy Quinn Harrison, a trial in which Lincoln acted as counsel for the defense. Harrison was tried for the murder of a man named Greek Crafton, who was stabbed at a drugstore in Pleasant Plains. Harrison was clearly the one who did the stabbing, but Lincoln's defense claimed self-defense. He used dramatic testimony of a dying declaration from Crafton to a Methodist minister, who happened to be Peachy Quinn Harrison's grandfather, that Crafton knew he himself was responsible for the drugstore scuffle. It was apparently a spirited and shrewd defense, demonstrating just how good a lawyer Abe really was under his folksy railsplitter exterior.

If you are interested in seeing "The Affray," you are advised to reserve tickets NOW, given how quickly the show sold out in 2011. To buy now, call 309-827-0428 or visit the Museum in person. if any tickets remain, they will be available at the door on the day of performance.

For more information, you may contact the Museum's Education Department at the phone number above or email education@mchistory.org
Posted by JulieK at 1:48 PM