Drama Desk Awards Handed Out to Follies, Once, Salesman and Tribes

The Drama Desk Awards were handed out last night in New York, with revivals of "Follies" and "Death of a Salesman" plus new play "Tribes" and new musical "Once" taking prizes.

The Drama Desk Awards recognize excellence among Broadway, Off-Broadway and Off-Off-Broadway shows and performers. The organization was formed in 1949 by a group that included New York theater critics, editors, reporters and publishers, banding together to try to educate the general public about "vital issues concerning the theater." And the awards are still nominated and voted on by media people not associated with individual shows.

Seven plays were nominated in the Outstanding Play category, including David Henry Hwang's "Chinglish," Dan LeFranc's "The Big Meal," "Unnatural Acts" from Members of the Plastic Theatre, "Completeness," by Itamar Moses, "By the Way, Meet Vera Stark," by Lynn Nottage, Nicky Silver's "The Lyons," and the winner, "Tribes," by Nina Raine.

"Tribes" is described Ben Brantley for the New York Times as "a smart, lively and beautifully acted new play that asks us to hear how we hear, in silence as well as in speech." 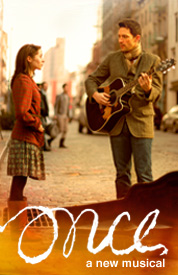 And, yes, the Drama Desk nominators did manage to find seven musicals to nominate for Outstanding Musical. "Bonnie and Clyde," "Death Takes a Holiday," "Leap of Faith," "Newsies," "Nice Work If You Can Get It" and "Queen of the Mist" were all nominated in addition to "Once," which won last night.

"Once" is based on the movie of the same name, about a Dublin street busker and the young Czech woman he meets one night who takes an interest in his music. Enda Walsh wrote the book for the stage musical, which keeps much of the music from the film, composed by Glen Hansard and Markéta Irglová and also performed by the two of them on screen.

"Once" director John Tiffany also won a Drama Desk Award (Outstanding Director of a Musical), as did the show's orchestrations (by Martin Lowe) and lyrics (Hansard and Irglová). 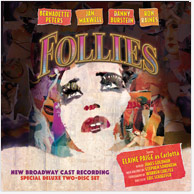 The award for Outstanding Revival of a Musical went to the production of Stephen Sondheim's "Follies" that took New York by storm before transferring to LA and changing leading ladies. (Bernadette Peters was replaced by Victoria Clark.) "Follies" beat out the infamous "Carrie," Andrew Lloyd Webber's "Evita" and "Jesus Christ Superstar," the new version of the Gershwins' "Porgy and Bess" (with the book updated by playwright Suzan-Lori Parks for this production), and Bertolt Brecht's "The Threepenny Opera."

Danny Burstein, who played Buddy in "Follies," won as Outstanding Actor in a Musical with Gregg Barnes (costume design) and Kai Harada (sound design) also winners. Burstein's competitors were Kevin Earley in "Death Takes a Holiday," Raúl Esparza in "Leap of Faith," Jeremy Jordan as the lead Newsie in "Newsies," Norm Lewis as Porgy in "Porgy and Bess" and Ricky Martin as a very different kind of Che in "Evita." 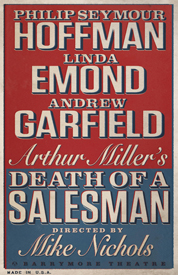 The revival of "Death of a Salesman" starring Philip Seymour Hoffman took the Outstanding Revival of a Play award in a category that included Bloomington's own Rachel Crothers and her play "A Little Journey," Edward Albee's "The Lady from Dubuque," Gore Vidal's star-studded "The Best Man," "Lost in Yonkers" by Neil Simon and last winter's BAM production of Shakespeare's "Richard III" starring Kevin Spacey.

Mike Nichols was named Outstanding Director of a Play for that "Salesman," although Hoffman lost out to James Corden in the British import "One Man, Two Guvnors" for Outstanding Actor in a Play. Others in that category included Kevin Spacey for his R III, Hugh Dancy for "Venus in Fur," Claybourne Elder in "One Arm," Santino Fontana for "Sons of the Prophet" and Joseph Francini in "The Navigator."

Outstanding Actress in a Play went to Tracie Bennett for playing Judy Garland in "End of the Rainbow," with Sanaa Lathan nominated for "By the Way, Meet Vera Stark" along with Linda Lavin in "The Lyons," Jennifer Lim in "Chinglish," Kim Martin-Cotten in "A Moon for the Misbegotten," Carey Mulligan in "Through a Glass Darkly" and Joely Richardson in "Side Effects."

The oft-lauded Audra McDonald added another one to her trophy case, winning Outstanding Actress in a Musical for her performance in "Porgy and Bess," in a category that included Jan Maxwell and Bernadette Peters in "Follies," Miche Braden in "The Devil's Music: The Life and Blues of Bessie Smith,"  Kelli O'Hara in "Nice Work If You Can Get It" and Molly Ranson in "Carrie."

You can see the complete list of nominees and winners here. And now it's on to the Tony Awards next Sunday, when many of these people will once again dress their best to vie for statuettes and some thank you time at the microphone.
Posted by JulieK at 1:54 PM