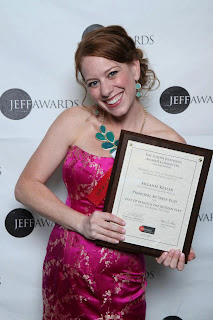 When the Non-Equity Joseph Jefferson Awards for excellence in Chicago theater were handed out last Monday, June 4, IWU alum Melanie Keller (BFA in Acting, 1997) was front and center. Keller was honored as Best Actress in a  Principal Role in a Play for her work in "East of Berlin & The Russian Play," two plays by Hannah Moscovitch, as presented at Signal Ensemble Theatre.

Since leaving Illinois Wesleyan, Keller has appeared in numerous roles with Chicago's First Folio Theatre, including playing Elvira in "Blithe Spirit" and Gilda in "Design For Living," and she was part of the Signal Ensemble in their world-premiere, Jeff-nominated production of "Landslide." For Signal, she has played Kate Hardcastle in "She Stoops to Conquer," and she was nominated for a Jeff Citation for Best Supporting Actress for her performance in "The Weir." She was also named the Chicago Fellow sent to to the Stratford Shakespeare Festival of Canada, appearing in "Love's Labour's Lost," "Romeo and Juliet," and "Caesar and Cleopatra" with Christopher Plummer. 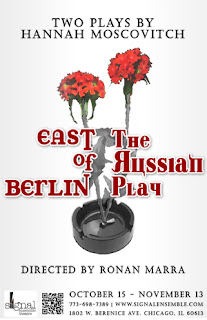 Chris Jones reviewed "East of Berlin & The Russian Play" for The Chicago Tribune, talking mostly about the "East of Berlin" side of the program, which matches the daughter of a Holocaust survivor, played by Keller, with the son of one of the Nazis who engineered it, played by Billy Fenderson. Jones called the acting in "East of Berlin" exceptional, as he noted, "One scene between Fenderson's self-loathing Rudi and Keller's exquisitely vulnerable yet determined Sarah is so profoundly sad, it sits with me still. It is an intimate act interrupted by the kind of terrible questions that, when the sins of the father are so great, make even future pleasures feel immoral — or maybe transformative."

You can see the whole list of 2012 Joseph Jefferson Award winners here, including multiple honors for Sean Graney and the Hypocrites for their "Sophocles: Seven Sicknesses," "Punk Rock" at the Griffin Theatre Company, and Theo Ubique's production of "The Light in the Piazza."